You are here: HomenextTopicsnextTrade and businessnextBankingnextA history of banks in Brighton

A history of banks in Brighton 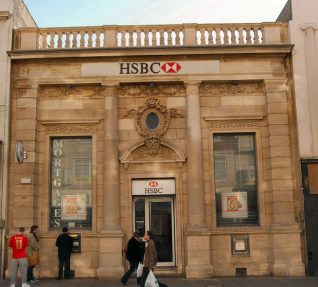 Until 1787 Brighton townsfolk and visitors used banking facilities at the county town of Lewes, but in that year Thomas Harben and associates opened a banking office at 103 North Street, an establishment that failed in 1793; it was then restarted by Shergold Michell Mills and Company and came to be known as the Old Bank.

Several other private banks opened around the turn of the nineteenth century. These included the Brighthelmstone Bank, established in 1794 by Rickman and Wigney at Steine Lane before moving in 1819 to the corner of Castle Square and later to Avenue; the Brighton Union Bank, opened 1 August 1805 at 6 North Street by Messrs Golding, Browne, Hall, Lashmar and West; and the Brighton and Sussex Bank, founded in 1818 in St James’s Street. In fact seven private banks were established in the town in the period from 1787 to 1842, but only two survived the financial panic of 1825 and were still trading in 1836. The Brighthelmstone Bank, known also as Wigneys Bank, absorbed the Old Bank, but it too was forced to close in March 1842, ruining many people and forcing the resignation of Isaac Wigney as a Member of Parliament for Brighton.

The lone survivor was the Brighton Union Bank which increased its trade following the failure of Wigneys. It expanded into adjacent buildings, occupying nos.6-9 North Street, and its partners were treasurers of several local institutions including the town commissioners and borough council. In the 1860s, ’70s and ’80s the Union Bank opened several branch offices in Sussex, but it was one of several taken over by Barclay Bevan Tritton Ransom Bouverie and Company of London as they expanded into provincial banking; Barclays Bank took over the Union Bank on 22 August 1894. The local head office remained at 6-9 North Street until 1959 when it moved to the new building at 139-142 North Street; the old building was then absorbed by Hanningtons department store where it is distinguished by angular bays.

The banks of the late twentieth century are, naturally, wealthy institutions and occupy some interesting buildings. Indeed, the Barclays Banks at Rottingdean High Street and St Peter’s Place; the National Westminster Bank in St James’s Street; and the Lloyds Bank at the corner of Norfolk Road and Western Road are listed buildings. Five banks in North Street, one at Pavilion Buildings and two in Western Road utilise classical stone designs mainly of the early twentieth century (the Midland in Western Road is particularly impressive), while other interesting bank buildings include the Royal Bank of Scotland in Castle Square, formerly Electric House; the Co-operative Bank in Ship Street, formerly the Robertson Hall of Holy Trinity Church; Lloyds Bank in Rottingdean High Street, a cobble-fronted building that once housed a National Telephone Company exchange; the Allied Irish Bank in an elegant 1930s design in Marlborough Place; and the National Westminster Bank in London Road a noble Victorian red-brick building.

The following resource(s) is quoted as a general source for the information above: {15,18,263a}

Updates on the text

The Barclays Bank which was in St. Peter’s Place, is now the Brighton Housing Trust.

Lloyds Bank which became Lloyds-TSB and stood at the corner of Western Road and Norfolk Road, is now ‘Bankers’, a fish and chip shop.

The Midland Bank in Western Road is now a branch of HSBC.

The  Co-operative Bank which was in Ship Street is now the ‘Steamer Trading Company’.