You are here: HomenextTopicsnextTrade and businessnextMarketsnextThe first market charter granted in 1313

The first market charter granted in 1313 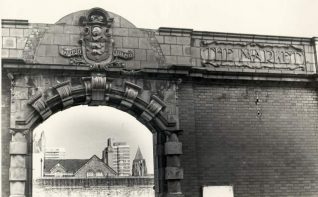 zoom
Facade of the Market Buildings, c. 1970s: An arched gateway which had led to market buildings built in 1900-1901 by the borough engineer Francis May in red brick and terracotta design in three sections. Each building had an iron roof and arched glass, selling fruit, vegetables and flowers. They closed in 1938 when the Circus Street Municipal Market opened, and was demolished. This archway and Market Street disappeared in the development of Bartholomew Square which opened in 1987
Image reproduced with kind permission from Brighton and Hove in Pictures by Brighton and Hove City Council

a) MEDIEVAL MARKETS: The tolls charged from markets and fairs were once an important source of income for manorial lords. The first Brighton market was a weekly Thursday market granted to the lord of the manor, John de Warrenne, Earl of Surrey, by Edward II in a charter dated 23 July 1313, and was probably held on the cliff top between Black Lion Street and Ship Street, just east of the Townhouse. By 1665 though, following erosion of the cliff, the Market Place had moved to the Hempshares in the middle of the town, and in about 1730 the Thursday market was re-established at the Bartholomews in front of the old Town Hall. {1,10,14,18}
An earlier Tuesday market was granted to the Bishop of Chichester at Preston in 1226 by Henry III. In 1307 the day was changed to Monday, but it probably died out in the fifteenth century, if not before. {1}

b) FIRST DAILY MARKET: The 1773 Brighton Town Act authorised the newly-established town commissioners to erect and regulate a market building for the daily sale of meat, fish, poultry, butter, and garden produce. The new market hall was erected in 1774 in the Bartholomews, on the site of the present Town Hall, and from 1797 the tolls were leased to private individuals for collection. In 1802 the market house was enlarged on both east and west sides, and further additions were made in June 1806, principally for the fish traders. In 1823 it expanded into the former workhouse building, that establishment having moved to Church Hill, but the whole building was removed in 1829 for the erection of the new Town Hall. {1,14,18,112}

c) NEW MARKET BUILDING: In 1828-30 a new market house was erected on the site of the old Town Hall on the western side of Market Street, backing onto the Thatched House in Black Lion Street. Designed by Thomas Simpson, it was a ‘T’-shaped building with a classical fa..cs.ade of pediment supported on four square pillars, and had entrances in Market Street and Black Lion Street; another entrance was made from Little Castle Square to the south in about 1842 when new facilities were added for fish traders. The market was open daily, but the principal days were Tuesday, Thursday and Saturday when it remained open until 10 p.m. {24,112}