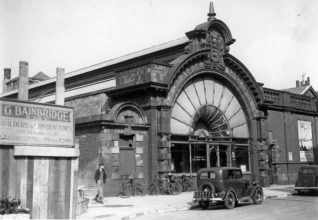 zoom
Floral Hall, 1938: The Floral Hall was part of the market buildings which were built between Black Lion Street and Market Street in 1900-1901 by the borough engineer Francis May in red brick and terracotta design in three sections, each with iron roofs and arched glass, selling fruit, vegetables and flowers. Above the entrance the twin dolphin crest of Brighton Borough can be seen. Closed in 1938 and was demolished; The entrance facade remained however and the site was used as a car park until 1984 when work began on building Bartholomew Square which opened in 1987.
Image reproduced with kind permission from Brighton and Hove in Pictures by Brighton and Hove City Council 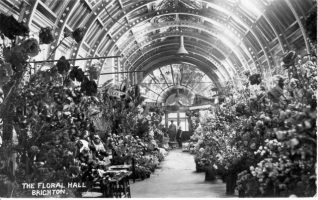 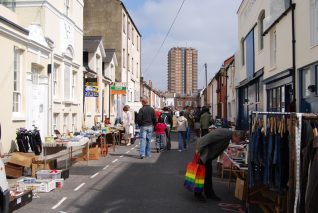 d) RECONSTRUCTION: In 1900-1 the market was rebuilt by borough engineer Francis May in a red-brick and terracotta design in three sections, each with arched glass and iron roofs. Two of the sections dealt in fruit and vegetables, while the southern part was used for selling flowers, the Floral Hall. This market building itself closed in 1938 after the Circus Street building opened, and was demolished and converted into a car-park in 1940, although the Market Street fa..cs.ade remained until the construction of Bartholomew Square in 1984-7. {114,130}

e) MUNICIPAL MARKET : The present municipal wholesale market in Circus Street was opened in January 1937 on a slum clearance site which included St Margaret’s Mission Hall and the small houses of Circus Street and Circus Court. A new fish market was opened in the building in January 1960 by the Duke of Norfolk, replacing the Victorian facility on the Lower Esplanade. This market building is now scheduled for redevelopment. {83,116}

f) SATURDAY MORNING MARKET , Upper Gardner Street : In the last years of the nineteenth century, street-traders (‘barrow-boys’) began to congregate in Bond Street and Gardner Street . The police and the county borough council, tired of moving the traders on, set aside Upper Gardner Street for their use on Saturday mornings just after the turn of the century. The antiques, bric-a-brac and junk now sold between 7 a.m. and 1 p.m. every Saturday are a great attraction.
The ‘leader’ of Brighton’s barrow-boys was Harry Cowley (1890-1971), a chimney-sweep by trade but a champion of the traders, the poor, the elderly and the homeless. Born at 33 Lincoln Street, his campaigns won fixed pitches for street-traders in both Upper Gardner Street and the Open Market , and he also started a movement of ‘vigilantes’ (‘squatters’ in modern parlance) after both wars to provide roofs over the heads of the homeless in empty properties. He was one of the best-known and best-loved men in the town for many years. {281,291}