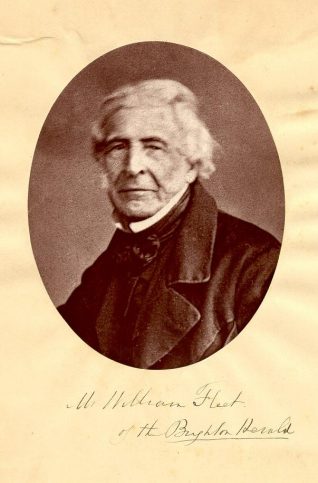 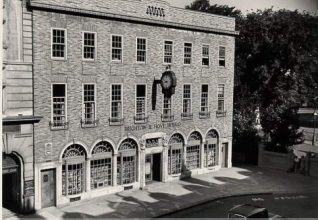 The principal local newspaper of Brighton and Sussex is the:

a) EVENING ARGUS: Originally known simply as The Argus, after the hundred-eyed, all-seeing giant of Greek mythology. The first edition sold for one halfpenny and was published on 30 March 1880 at 130 North Street, where a loft on the roof housed the pigeons that brought in stories from the far corners of the county. From 7 November 1889 an East Sussex edition was printed at Hastings, and on 1 January 1897 the newspaper was renamed the Evening Argus; a Morning Argus was also published from 2 September 1897 until 3 May 1926. The price was increased to one penny in March 1918, and in February 1926 the first photograph was included, of a fire at the Court Theatre in New Road. The printing works eventually moved to SpringGardens with type still set in North Street, but in 1926 Southern Publishing acquired Robinson’s printing works and adjoining premises at the southern end of Robert Street, enabling all departments to be housed in the same building.
The Evening Argus reached a crisis in the Second World War when circulation fell to just 19,000. The Hastings plant was closed, but after the war the paper was reorganised and re-equipped, and the circulation gradually rose again. The ‘magic’ figure of 100,000 copies per day was reached in October 1964, and total readership is now around 250,000. In 1972 paper type replaced hot metal, the first photo-set front page was produced on 28 October 1977, and in July 1987 the paper went completely ‘electronic’. In 1990 a £20 million newspaper printing investment at the Hollingbury industrial estate was announced, but the offices and journalists will remain in Robert Street . (See also “Southern Publishing Company” below.) {19,123}

Many newspapers and ‘visitors lists’ (which recorded the arrival of fashionable visitors) were published in Brighton in the nineteenth and early twentieth centuries. Many were short-lived, but the best known are detailed below.

b) BRIGHTON GAZETTE: A weekly paper, first published as the BrightonGazette, Sussex and General Advertiser or Worthing, Eastbourne and HastingsFashionable Chronicle on 22 February 1821 by E.H.Creasy, in premises beneath Donaldson’s Library at the corner of Old Steine and St James’s Street . The offices later moved to 168 North Street, and from 1835 it was printed in a building adjoining the Central National Schools in Church Street. From 1852 it was published at the Pavilion Dormitories behind North Street, but the Gazette was later acquired by the Southern Publishing Company. On 2 April 1938 it became the Brighton and Hove Gazette. The paper incorporated the Southern Weekly News from 19 November 1965, and continued as the Brightonand Hove Gazette and Herald in 1971, having incorporated the Herald. The last edition was published on 9 March 1985 when the Gazette was itself absorbed by the Brighton and Hove Leader, launched as a free weekly on 25 June 1981. (See also “Southern Publishing Company” below.) {6,19,24}

c) BRIGHTON HERALD: The first newspaper to become established in Brighton was first published on 6 September 1806 at 8 Middle Street by H.Robertson Attree and Matthew Philips, with Robert Sicklemore as editor. From May 1808 Attree carried on the business alone and the offices were moved to the top of North Street, but in January 1810 Attree took the manager William Fleet into partnership, and then left the business himself the following April. Fleet moved the Herald offices to Prince’s Place, and took his son Charles into partnership in 1843, retiring in 1864. Charles Fleet then took John Bishop, with the paper since 1839 and later to become a well-known local historian, into partnership, and left him as sole proprietor when he himself retired in June 1880.
The Herald rapidly established itself as a leading provincial weekly, and was the first newspaper to report the escape of Napoleon from Elba in 1815, the start of the French Revolution of 1830, and the arrival of Louis Phillipe at Newhaven in 1848. In 1934 an elegant new office building was opened on the western side of Pavilion Buildings; it was decorated with the arms of Brighton and Hove and is now occupied by the Royal Insurance Company. The name of the paper changed to the Brighton Herald and HoveChronicle on 19 July 1902, and to the Brighton and Hove Herald on 4 November 1922. The final edition, no.8621 after 165 years, was produced on 30 September 1971 when the Herald was absorbed by the Brighton and HoveGazette. {6,15,24}

d) BRIGHTON STANDARD AND FASHIONABLE VISITORS LIST: Published on Tuesdays, Thursdays and Saturdays, the Standard first appeared on 4 July 1865 as the Brighton Fashionable Visitors List and changed its name on 7 May 1878. It continued until 4 March 1953, a total of 13,249 editions. (See also “Southern Publishing Company” below.)

The following resource(s) is quoted as a general source for the information above: {83,123,301}