You are here: HomenextTopicsnextCrimenextCrime (General)nextThe mystery of the Brighton treadmill

The mystery of the Brighton treadmill 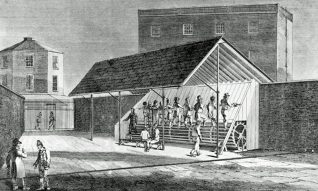 zoom
The treadmill at Brixton Prison 1822. Click to open a large version in a new window
From the private collection of Andy Grant 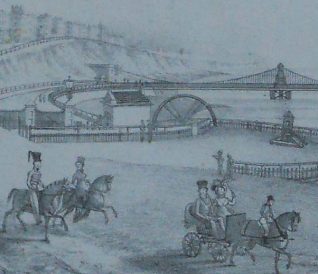 zoom
The treadwheel, or waterwheel, at the Chain Pier Esplanade 1823-4.
Courtesy of the Society of Brighton Print Collectors 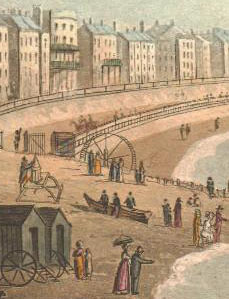 zoom
View two of the treadwheel, or waterwheel, at the Chain Pier Esplanade 1823-4.
Courtesy of the Society of Brighton Print Collectors

What are the facts?

In the ‘Sussex County Magazine’ of May 1932, a reader submitted an article about the Brighton Treadmill which was accompanied by an illustration purporting to show a view of the treadmill and querying where it might have been situated. From time to time this subject has resurfaced, although so far as I was aware, Brighton had never had a treadmill for punitive purposes. It is therefore worth examining the known facts about this subject.

The use and invention of the treadmill can be credited to William Cubitt of Ipswich, who in 1822 submitted a paper recommending its use for the employment of prisoners. The Society for the Improvement of Prison Discipline readily adopted this suggestion and within a short space of time one was erected at Brixton Prison. The illustration submitted by the reader of the ‘Sussex County Magazine’ is identical to the one shown in Cubitt’s paper and is of Brixton Prison, not of Brighton.

However, there have been occasional mentions of a tread-wheel in Brighton ‘at the bottom of the Steyne’ in contemporary issues of the local newspapers. These references are without exception to a waterwheel that was erected in May 1823 by William Mott and a Mr. Hurley on behalf of the Chain Pier company. On the morning of 24th November 1824, the ‘Brighton Gazette’ reported that ‘the treadwheel or waterwheel at the bottom of the Steyne was broken into pieces by the waves’. It continued that the Commissioners intention was to ‘remove the odious waterwheel at the entrance to the chain pier esplanade and substitute a horizontal one instead’. This was done and the new waterwheel, operated by a capstan and horse, could raise a cartful of water in two and a half minutes.

All references to the sentencing of Brighton prisoners on the treadmill allude to those installed at Lewes Prison, which originally had one erected in the 1820s and a further two in the 1830s. A report from the Chaplain of Lewes Prison written for the years 1838-9 makes it clear that offenders from Brighton were regularly committed from there to the prison’s treadmill.

In May 1827 the Directors and Guardians of the Poor requested a Mr. Penn to produce plans for a treadmill, destined to be installed at the Workhouse. The idea was both to discourage what were considered to be idle loafers from seeking shelter there during the winter months and to raise an income for the workhouse by using the treadmill to grind corn. Unfortunately the Directors and Guardians did not uphold their side of the deal, resulting in a court hearing to recover 555s.0d. costs incurred by the contractor. The court decided there was no case to answer and ultimately the treadmill was never built.