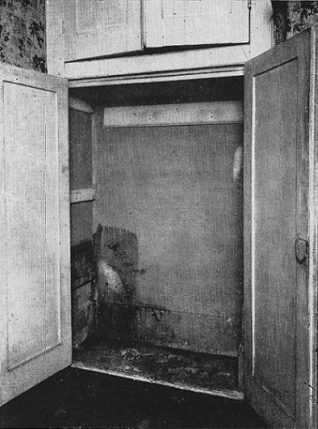 zoom
Cupboard at 52 Kemp St, where the trunk was hidden
From the 1934 police photo L.N.A.

The timing of events almost beggars belief; back at number 52 Kemp Street on the 13th July workmen turned up to paint the outside of the house.  Although the windows were closed, an offensive smell was detected from one of the rooms.  Knowing of the body found in the trunk at Brighton Station, and the still missing arms and head, it was quickly reported to the police.  There was a 48 hour delay before the house was entered and searched; another trunk was soon discovered hidden in a cupboard.  Considering the putrid smell the police were sure they had solved the puzzle of the missing head and arms from the station torso.  Imagine their shock and surprise when they found inside the large black fibre trunk the body of another woman!

Spilsbury called back to Brighton

Spilsbury was quickly called back to Brighton and carried out the post-mortem on the afternoon of Sunday 15th July.  The woman, whose age he estimated at 40, had been killed by a violent blow to the head, probably with a hammer, causing a depressed fracture, with a piece of skull driven inwards against the brain.

The victim was soon identified as 42 year old Violette Kaye.  Both the press and public wrongly connected this new crime with the station trunk murder.  In next to no time it was established that Tony Mancini had been the last tenant.  He had only been released from questioning 24 hours earlier, and had made his way to London.  By the following day the hunt for him was on, and on the 18th of July he was spotted at Blackheath and detained.  When he was brought back to Brighton, Market Street where the Town Hall and Police Station stood, was packed with a jostling, hooting and hissing crowd.

Mancini’s story was, on returning to the basement flat in Park Crescent he shared with Violette on May the 10th he found her dead on the bed.  Other men visited her, and he kept out of the way at these times, he suggested one of them killed her.  With his dubious background he feared the police would not believe him, and panicked.  He brought the trunk, squeezed the body inside, and moved it (somehow) to Kemp Street.

At the trail, Norman Birkett defending, perhaps unfairly, put forward an alternative defence.  Traces of morphine had been discovered within her organs.  He suggested that a woman such as Violette was a drug addict, and that under the influence of morphine she had fallen on the steps leading down to the flat, and managed to reach her bed where she died.  The jury agreed that the case had not been proved, “beyond reasonable doubt” and brought in a not guilty verdict.  Mancini walked free, and no one else was ever charged with the murder.

The police extended their inquiries regarding the station torso; over 700 “missing” women were traced and eliminated.  Women attending hospital for pre natal advice were traced, in just one London hospital alone 5000 cases were checked, and all but 15 were also eliminated.  For weeks 200 plain-clothes police called at hotels and lodging-houses along the south coast, but to no avail.  At that time no passports were required for short trips to France and a theory was put forward that suited Brighton people.  Perhaps the woman was from the continent; the investigation was eventually run-down, and no one was every charged.

In 1976, just before he died, it’s alleged that Mancini confessed that during a blazing row by accident he killed Violette.  A prosecution for perjury was considered, but because of a lack of corroboration it was rejected.  Whatever is true, Violette died about the 10th of May, which strictly speaking makes her the second Brighton trunk murder.  Her body was not discovered until the 15th July, while the station torso was found earlier on the 17th June, but was killed around the 4th of June, making her the third Brighton Trunk murder.  The missing head and arms were never found, nor was she ever identified, and again no one was ever charged!

The facts and photos for this article have been taken from the book, Bernard Spilsbury, His Life and Cases, by Douglas Browne and Eric Tullett.