You are here: HomenextTopicsnextEntertainmentnextBrighton and Hove on FilmnextThe Quadrophenia Tour 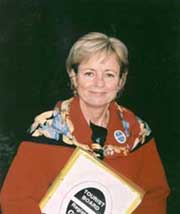 Glenda Clarke works as a tour guide in Brighton. Amongst the many walking tours she offers to the public is her famous ‘Quadrophenia Tour’. To find out more information about Glenda Clarke’s walking tours of Brighton please visit her website at www.brightonwalks.com

“I used to live on the seafront where the Thistle Hotel is now, that used to be a gift shop and newsagents downstairs with a little flat upstairs. So I was in Brighton while they were filming Quadrophenia, but at the time didn’t take that much notice because at the time I didn’t know what it was going to end up as! I personally think the film is brilliant, it really sums up 1964!”

Origins Of The Quadrophenia Tour
“Over the years when I’d done other general walks of Brighton I found that quite often people would ask me questions about it. Then I was approached by Sky Television who were doing a programme about the making of Quadrophenia for me to take them to the locations. Then my daughter who was 16 at the time came home one day and said ‘Mum, have you ever seen a film called Quadrophenia?’ She’d just seen it with her friends and she thought it was brilliant. I thought – well, if it’s as popular now as it was 25 years ago maybe it would be worth my while putting together a tour.”

Devising The Tour
“When I’m putting together different tours what people don’t realise is it takes on heck of a lot of research, it takes a lot of time. It’s not enough to just open a book and say to people this scene was shot here, people want more than that. I go into very great depth because I found out that the people that want to do the Quadrophenia walk are the people who just adore the film like I do, so it’s not enough to just take them to the different locations. I’ve got lots of anecdotes to talk about the filming and I use a lot of visuals on my tour. If I’m talking about a person then I like to show a photograph, if I’m talking about a scene in a film, then I try to get a copy to show them.”

Who Will You Find On The Tour?
“Oh, the Quadrophenia Tour is amazing! The people who come on the tour may have seen it once or twice and others have seen it a hundred or more times. You get the people who’ve just seen the film for the first time, they may be quite young early teens, mid teens. You get the people who were Mods and Rockers, now and again I may get people who were here in 1964 which is great and the scooter clubs are quite into Quadrophenia. I also get a lot of people from overseas. I’ve had people from all over Europe, America, Canada, Australia and quite a few from Japan because in those countries, like this, its still a very cult film. They visit London to see the sights but they come to Brighton for the day just because of Quadrophenia, the film really touches everyone. It’s a great mixture and people always start chatting, ‘Where have you come from?’ and all that sort of thing. It’s a nice atmosphere.”