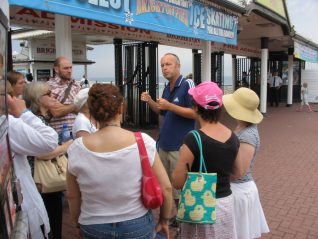 I’m actually doing a walk during Brighton Festival Fringe this year. It’s based on Brighton Rock the film and the book, which is one of my sort of loves I suppose.

Lively gang fights at Race Hill
Brighton Rock [has] always put into peoples’ mind the terrible race gang fights up at Race Hill in Brighton which I’m not quite sure were ever quite that horrific but in the film they were quite lively. In the 1930s there were something like 14,000 off-course bookmakers throughout the country who were dealing in betting, which obviously made the crime in terms of unlawful betting very high and people, like Pinky from Brighton Rock, obviously thrived on these sort of extortion rackets and things that went on in the town.

Converting literature into f ilm
I think most of my research has been about the book and the film. … the book and the film are interesting in that obviously if you know Brighton Rock you’ll know that the film takes some quite large liberties and creates things that never ever happened in the book. But of course they had a sort of 90 minute runtime to make a film and they had to make it as attractive as possible to the audience.

Filming in the summer sun of 1947
It was 1947 that they did the actual filming in Brighton, so the war had been and gone. But it wasn’t that far away, because when they were making the film in Brighton, a lot of the crew, who’d just come out of the Services, actually because the summer of 1947 was an extremely hot summer and the crew, the Boulting Brothers and people making the film were, a lot of them were actually wearing their ex Summer Services kit in order because they were on the pier etc and it was blisteringly hot.

Walking through the story
My walk goes round different locations which were featured in the film. I use stills from the film … [because] people coming on the walk probably won’t remember a lot of bits of the film so I’ve got stills which actually bring it to life and then we can sort of talk about what happened at this location …