Although local radio had existed in other countries for very many years, it had never been tried in Britain. In the 1960s the BBC carried out a number of experiments and tried to encourage the government to let it open a number of local stations. Later in the decade the government asked the BBC to open 9 experimental stations. The BBC had to provide the capital costs but towns and cities involved had to provide much of the running costs.

An interesting challenge
I was born in Hove and except for a period doing National Service I had lived in the twin towns all of my life. I had joined the BBC in the war years as an engineering Youth in Training. By the 60’s I had become a radio producer and presenter based in London’s Broadcasting House.  Local radio looked an interesting challenge so I took part in some of the experiments. When Brighton indicated it wanted a station I applied for the post of station manager and was successful.

Marlborough Place
The BBC chose the old Blenheim Hotel on the corner of the Marlborough Place, opposite the north gate of the Royal Pavilion as the site for the station. Latterly it had been the local office of an insurance company.  From the outset I believed that the development work for the station should not be done in a London office so my secretary, Carol Head and I set up an office in a small bedroom in her house in Hove!

Recruiting staff
One of the first tasks was to find staff for the station. One of the most important people to be appointed was the station engineer, Ted Castle.  He was a London outside broadcast engineer responsible for events like the Boat Race – and was the designer of the newly introduced radio car. Working with Appointments Department we went on to select my deputy, the Programme Organiser. This was David Waine, a television reporter from Southampton who was still in his early 20s. Some regarded this as a somewhat controversial decision, feeling that I should have selected someone older and more experienced. 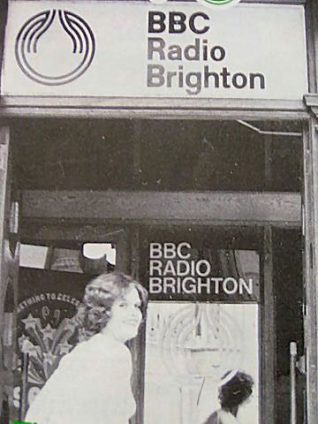 A good choice
David proved a wonderful person to work with and later moved on to open a local station in Bristol, then to Plymouth to run their television and radio output and finally to Birmingham to take charge of all the BBC’s activities in the Midlands.  No journalists were appointed initially, as the decision was taken to get the local news from an agency – the one selected was that run by Alan Robson. To be responsible for the programmes five producers were appointed.

The staff line-up
The one local man, who incidentally had no experience of radio, was Keith Slade.  He became what was probably the best arts producer in BBC local radio. John Henty, who came from Croydon and did have some radio experience, was appointed to look after sport. In later years he became very popular with the local audience doing more general programmes.  Hilda Bamber. with experience in Services Radio, joined us to make programmes for women.  Mike Matthews had worked for 5 years for the NZBC (New Zealand Broadcasting Corporation) as a presenter and documentary maker; he had a talent for presenting music programmes. Chris Jones was, if I remember correctly, a member of BBC television staff; his subject locally was education.

Support staff
To work with the producers there were four station assistants. There was Gill Montagu and Jeanette Pointon [who was a London secretary]. Carole Stone had been a typist in the Southampton newsroom. She moved on to become a local producer in Bristol and then became the producer of the national political discussion programme on radio, ‘Any Questions’.  On retirement from the BBC, she used her experience with the programme to become a top London hostess and PR executive. Finally, another vital appointment was the second engineer, George Orchard, who like Ted became a tower of strength to the station team.

An office at last
As the studios and the wiring was going into the station I asked if we could now have an office.  Once it was agreed we ran into another problem because the furniture arrived on a Sunday and we had no key to the building.  It was only solved by my son getting in through a window and then opening the door.  The office was on the third floor and eventually we had one telephone line.