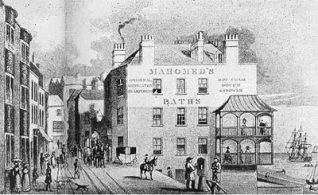 In the 1860s, very few houses had running water, and even after the Public Baths and Washhouses Acts of the late 1840s, there were still very few public baths. One way to get clean and relax was to take a Turkish bath and such baths became very popular from around 1859.

The idea of a Turkish bath is to cleanse the body by sweating in hot dry air until the dirt can be rinsed away. Unlike a Russian bath or an Islamic hammam, there was no steam in a Victorian Turkish bath. Bathers spent up to fifteen minutes in each of a series of increasingly hot rooms until they sweated profusely. Then, after a shower, they would take a dip in a cold plunge pool, be scrubbed and massaged by a shampooer, and finish off by relaxing in a cooling room before getting dressed again.

The first short-lived Turkish bath in the locality was a small one opened in 1862 by a Dr Toulmin at 65 Western Road, Hove. The popularity of this bath and of Sake Deen Mahomet’s Vapour baths in King’s Road probably helped encourage a group of wealthy men to build a much larger Turkish bath at 57 West Street in Brighton.