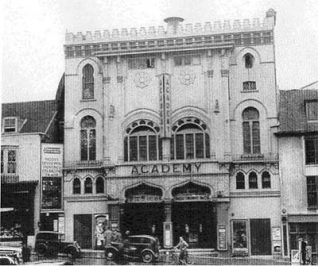 On 22 May 1867, a group of wealthy men formed a company called the Brighton Turkish Baths Co Ltd to build and run a new establishment which they called the Brighton Hammam, and employed Mr Horatio Nelson Goulty, of Goulty & Gibbons, as architect. The building looked Moorish both outside and in, cost £14,000, and was opened on 12 October 1868.

A magnificent building
The building was magnificent. The galleried cooling room was nearly 14 metres high and even longer. It had a fountain in the middle, and a floor of coloured tiles surrounded by polished wood. Around it were alcoves called divans, curtained for privacy and ‘pillowed in damask and silk’. A marble plunge pool, with plants around, led through a Moorish triple arch to the central hot room where four recesses formed the two hottest rooms (with marble seats covered in felt and cushions), together with a lavatory and shower. Upstairs, there were roughly similar-but inevitably smaller-baths for women.

Entrance to the Hammam was not cheap, with tickets costing two shillings (10p) each. But this was reduced to one pound for a dozen tickets, and children under twelve, unusually – since few Turkish baths allowed them in at all – paid only half-price.

Bath goes bust
The Hammam declined in popularity towards the end of the nineteenth century and in 1896 the bath company went into liquidation. A guide book published that same year said the baths were ‘comfortable and commodious, though perhaps not so luxurious or so well patronized as the Turkish Bath in connection with the Hotel Metropole‘ which had recently opened.

The Hammam remained open under the ownership of a Mr William Bennett until some time around 1910. It was then sold and converted into the Academy Cinema which, with several refurbishments and name changes, remained open till 1939. It was then largely rebuilt, remaining a cinema till it was demolished in 1973.

Unfortunately, no images exist of the interior of the Brighton Hammam, but one can still get the flavour of the building in this photograph of the outside of the cinema as it was in 1939, just before it was remodelled in 1930s style.