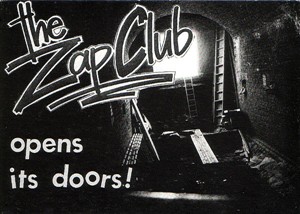 1978 – The Expressive Arts Course is established at Brighton Polytechnic, which turns into a breeding ground for many of the cross-media artists that become involved in the Zap Club ethos, amongst them Ian Smith, ‘Birds with Ears’, Billy Cowie, Liz Aggiss, Steve Edgar and Roy Hutchins.

1980 – Alan McGowan starts promoting the new alternative comics from the ‘Comic Strip’ at the Pavilion Theatre. Dave Lavender presents Karl Valentine’s ‘Komic Kabaret’ at the same venue giving Neil the idea of mixing art and entertainment in a cabaret format that was to become the programming model of the early Zap Club. Many years later Dave Lavender sets up the Komedia.

Before the arches – 1982-1984
1982 – On 20th April, the first gig is organised by Neil and Amanda Webb at the Brighton Belle, Oriental Place. Ian Smith is recruited as compere and the evening includes poet Roger Ely and local band ‘The Eliminators’. The event is positively reviewed by legendary New York journalist and biographer of Dylan, Robert Sheldon.

The club begins on a monthly basis, but soon takes place fortnightly, then weekly, with an anarchic mix of performance, poetry, comedy and music. The club starts attracting performance students from Brighton Polytechnic who use the club to experiment with new ideas.

The Zap quickly outgrows the New Oriental and moves to the Royal Escape basement.

Ian Smith remains the regular compere with ‘Extremists in an Igloo’, the irregular house band, alongside ever more extravagant shows involving film, performance art, installation and, on occasion, a twenty piece choir and special effects.

A performance surfing event takes place – one of the first major events to take performance outside.

Channel 4 ‘Ear to the Ground’ is filmed at the Royal Escape, profiling Ian Smith.

1983 – Zap moves to the upstairs of the Richmond Pub and continues to thrive. Choreographer Liz Aggiss and musician Billy Cowie invite Neil to join them and Ian Smith in the ‘Wild Wigglers’, a lunatic Bauhaus influenced dance performance group.

Ian Smith is featured as the contemporary entertainment ‘face’ of Brighton alongside Dora Bryan and Douglas Byng in the BBC documentary ‘The Last Resort’.

The Zap Club Years – 1984-1997
1984 – Architect Anthony Browne converts two of the Kings Road arches on the seafront into a performance arts space. Staff and artists volunteer labour, from digging out foundations alongside the builders, to painting the damp walls with waterproofing.

The Zap is marketed to members as a “club for artists, run by artists who understand performers and their needs”.

Until 1989, Ian Smith acts as ‘the public face’ of the club and hosts ‘Performance Platform’ on Tuesday nights (later ‘The Silver Tongue Club’ on Sunday nights).

The Club hosts multiple other club nights, live music, cabaret, theatre and dance events, nights that often spill out onto the beach to continue until dawn.

‘The Punter’ is launched to promote Zap events.

Following demand for gigs and productions outside of the club, Zap Productions is launched with an additional director, Robin Morley.

An art reach project is set up to provide outreach entertainment for community groups across the city.

Free performances are held outside on the beach, with ‘Sonic Youth’ playing in November.

Zap sets up a record label and releases ‘Live at Zap Club’.

1986 – Pantomine ‘The Santa Claus Killings’, a Sherlock Holmes mystery, is directed by JJ Waller and perfomed at the Zap.

The Zap Tent opens during the Brighton Festival. ‘The Rail’, a piece of Canadian theatre is perfomed in a warehouse on the Freshfield Industrial Estate, built over the top of the old Kemp Town railway station. Audiences, seated on either side of the railway embankment, look on as the action takes place along the track in the middle.

Comedy show ‘Monsters from Outer Space’ comes to the Zap in Spring.

‘The Rhythm Sisters’ perform in June.

Pantomime, ‘The Last Temptation of Scrooge’ is directed by Andy Cunningham and performed at the Zap in December.

Club Shame, the influential gay club night is founded by Paul Kemp at the Zap club on Wednesday nights. ‘Gay Times’ called it “the blueprint of gay clubbing for the 90s”, with its unique combination of performance art and rave music.

‘Hamlet the Panto’ directed by JJ Waller is performed at the Club.

Pantomime ‘What’s up Dr Jekyll?’, directed by John Dowie, plays at the Zap.

Zap Productions brings ‘Archaos’, the anarchic alternative circus to Brighton. The show is forced to relocate to Stanmer Park after it is deemed too dangerous by authorities and is banned from showing at the Level.

1991 – In January ‘Manic Party’ is hosted by DJ Annie Nightingale.

Brighton Rocks Festival is produced by Zap and Radio 1 with bands like Echo Belly, Sleeper, and the Auteurs all performing and Annie Nightingale broadcasting throughout the night.

1995 – Zap opens the first Brighton cybercafé, in the Zap Club.

‘Chemical Brothers’ play at the Club.

After the Zap Club – 1997-present
In November the arches are sold and Webb Kirby Ltd become the new owners of the Zap Club.

1999-2000 – Zap Directors become event directors of the Millennium New Year’s Eve celebrations in Aberdeen (Robin) Brighton (Dave) and Glasgow (Neil). Brighton holds its biggest ever street party in the Old Steine, with street performers and live music. At midnight £15,000 of fireworks are launched into the sky above the sea.

The Waterfront Festival takes place in June, with water sports and entertainment stretching from Brighton Marina to Hove Lagoon.

2003 – Zap celebrates its eighteenth birthday with a party hosted by DJs Tim Deluxe and Paul Woolford.

Directors close Zap Productions, which is replaced with Zap Art, a charity already in existence since 1990. Streets of Brighton continues under Zap Art.