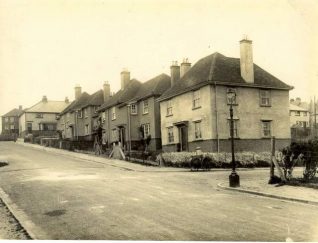 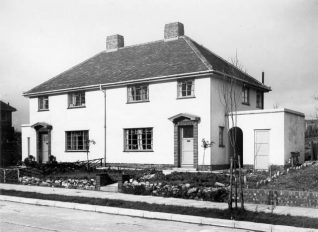 zoom
"A" Type Flats, Hollingbury., c. 1950: The "A" type duplex flats were built initially to be used as a 1 bed ground floor flat and a 2 bed first floor flat, but were designed to be easily convertible to one 3 bedroom house when there was no longer a housing shortage. Like many houses in Hollingbury, these had steel framed "Crittall" windows.
Image reproduced with kind permission from Brighton and Hove in Pictures by Brighton and Hove City Council

These nineteenth-century clearances were followed by the erection of new homes by private builders. The first council-built and rented houses were erected in the late 1890s at St Helen’s Road, on land given by Henry Abbey and Daniel Friend in December 1897 to mark Queen Victoria’s diamond jubilee. The small yellow- and red-brick houses were first let in 1900 at 7s. 6d. (37.5p) per week, and still stand on the western side of the road. Similar housing followed at Dewe Road and at May Road (now demolished). {2,115}
In 1921 Brighton was recorded as the most densely populated county borough in the country with the sole exception of West Ham. The first large-scale council housing developments were made at Moulsecoomb (q.v.) and at the Queen’s Park estate around Pankhurst Avenue in the 1920s, but it was not until the next decade, when the government made subsidies for slum clearance available for the first time, that the corporation started to tackle the housing problem on the scale required. Large clearances were made in the 1930s in the Carlton Hill , Upper Bedford Street and Upper Russell Street areas, while large housing estates were developed in the suburbs to rehouse former slum-dwellers; before the Second World War Moulsecoomb was extended, and the Whitehawk and Manor Farm estates were also laid out. However, the war brought a halt to the renewal programme, and the slums persisted until the 1950s when they were even described as the worst in Europe. {2,48a,123}
In the late ’50s and ’60s virtually all the Albion Hill area was cleared and redeveloped, along with large areas off Church Street , Upper Bedford Street and to the west of London Road . Now tower-block flats dominate the skyline in many areas, and there are twenty council blocks of ten storeys or more at Albion Hill; off Edward Street ; Upper Hollingdean Road; Upper Bedford Street; and at north Whitehawk . The first of these blocks was Highleigh, one of four built in the phase-one Albion Hill redevelopment which was officially opened by the mayor, Alan Johnson, on 16 May 1961. The tallest council block is Theobald House which opened in Blackman Street in 1966 with 110 flats in nineteen storeys above a 310-space car-park. Large post-war council estates have also been developed at Bevendean , Coldean , Hollingbury , Hollingdean and Woodingdean , such that there are approximately 11,400 council-owned dwellings in the borough. {123}
With the obvious slum housing eradicated, the worst housing conditions are now found in the bed-sitters and flats converted from former fashionable housing, particularly in the Regency area, and also in the earliest of the council estates. With its abundant deprivation and unemployment, Brighton therefore remains, enigmatically, both one of the richest and yet one of the poorest towns in the country.