You are here: HomenextTopicsnextHousingnextSlumsnextDisease and slum clearance 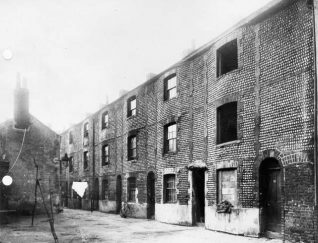 zoom
Flint and Cobble Buildings , c. 1910; A row of houses in the Carlton Hill area, built in c.1790 of flint and cobble-stones. These were probably demolished in the 1930s as part of Brighton Borough Council's ambitious slum-clearance programme.
Image reproduced with kind permission from Brighton and Hove in Pictures by Brighton and Hove City Council 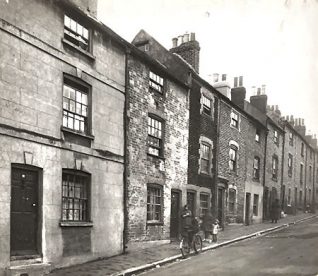 zoom
This is a photographic print of Richmond Hill, Brighton. It is a view northeast of several house fronts. Four pople can be seen standing in front of one of the doorways, while another figure is walking up the hill. A bicycle has been propped up against the kerb. This photograph was commissioned by the Environmental Health department of Brighton Borough Council. It was intended to serve as part of a visual record of areas considered for slum clearance. Richmond Hill was demolished as part of the Morley Street redevelopment in the late 1930s.
Royal Pavilion and Museums Brighton and Hove

In the debate about the 1853 Vaccination Act, the great social reformer Lord Shaftesbury said, ‘It is perfectly sure that smallpox is chiefly confined to the lowest classes of the population, and I believe that, with improved lodging houses, the disease might be all but exterminated.’

This was a constant theme throughout the following decades. Speaking at the Brighton Health Congress on 14 December 1881, (later Sir) Edwin Chadwick said: ‘Cases of smallpox, of typhus, and of others of the ordinary epidemics, occur in the greatest proportion, in common conditions of foul air from stagnant putrefaction, from bad house drainage, from sewers of deposit, from excrement-sodden sites, from filthy street surfaces, from impure water, and from overcrowding in private houses and in public institutions. The entire removal of such conditions by complete sanitation and by improved dwellings is the effectual preventive of disease of these species, and of ordinary as well as extraordinary epidemic visitations.‘

Overcrowding and sanitary inspectors
Parts of Brighton, especially around Edward Street, had numerous overcrowded properties. One seven-room house in Carlton Hill was home to 22 people. Another area notorious for poor housing was around Church Street, where Tichbourne Street now stands and where the Corporation’s first slum clearance began in the 1870s. The Model Dwellings opposite, on the corner of Jew Street, were built as early as 1852 as charitable housing for the poor and to show what could be done.

Sanitary inspections
The borough’s sanitary inspectors carried letters of authority bearing the town seal and wore dark blue uniforms similar to those of the police. They could enter domestic and commercial properties only with the occupiers’ knowledge but, if necessary, without their consent. The principal activity during the latter years of the nineteenth century was to ensure that households had water closets connected to the sewerage system so that cesspools could be filled in. Brighton was among the first 10 towns in the country to achieve this objective.

Improving standards
To bring private sanitation up to the standards of public utilities, the Brighton Improvement Act of 1884 required water closets to be connected to a constant supply of clean piped water. (The Constant Service pub in Islingword Road commemorates the first of the water companies acquired by Brighton Corporation between 1872 and 1897.)

New laws to control housing
Under the regime of the town’s Medical Officer of Health, Dr Arthur Newsholme, the inspections were extensive and any resultant orders for improvement were rigorously enforced. Newsholme also pressed the Corporation to improve street cleaning, especially during the summer, and to arrange regular refuse collection, which was introduced in 1892 on a weekly basis.

New standards of hygiene
Newsholme produced a detailed survey of houses thought to be overcrowded through sub-letting, as a means of persuading the Corporation to act. Despite some vociferous objections, new by-laws were introduced in May 1898 allowing the Medical Officer of Health to designate housing let as lodgings that should be inspected (but limited to a rateable value of no more than £26). The regulations granted powers to limit the number of lodgers, to set standards of hygiene and to make unannounced night-time visits to ensure compliance. Previously visits could not be made after 6pm. Eventually five inspectors were occupied full time in making inspections. In 1907, the year Newsholme left Brighton, over 13,000 inspections were made – almost double the number at the end of the 1880s in a town that had grown by only 20 per cent.