You are here: HomenextTopicsnextReligionsnextA history of religious dissent

A history of religious dissent 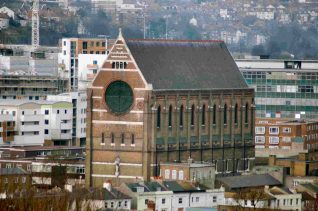 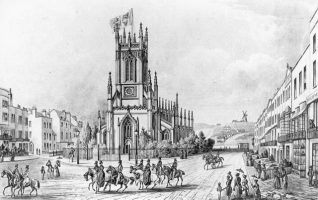 Religion has always played a major part in the country’s affairs and Brighton has been no exception. The medieval Priory of St Bartholomew was subject to the Dissolution of Henry VIII in 1547, and the parish church was, of course, Roman Catholic until the Reformation. In 1554 Deryk Carver of the Black Lion Brewery was the first protestant to be martyred during the reign of the Catholic ‘Bloody’ Mary I, and religious persecution, particularly of Catholics, Quakers and other non-conformists, continued into the late seventeenth century. In 1676 a religious census to determine the extent of dissent recorded 1,740 Anglicans in Brighton and 260 dissenters, while Preston had 64 and 1 respectively, Patcham 97 and 3, and Stanmer 43 and 0; Ovingdean and Rottingdean were not recorded. There was not a single Catholic recorded in any of these parishes.
As attitudes towards opposing denominations eased so chapels for the various sects were built in the town. The dates of the first permanent chapels are: Anglican (first chapel of ease, Chapel Royal) 1795; Baptist ( Bond Street ) 1787; Catholic (High Street) 1806; Countess of Huntingdon ( North Street ) 1761; Jewish ( Devonshire Place ) 1826; Methodist (Dorset Gardens) 1808; Presbyterian ( Union Street ) 1688; and Quaker ( North Street ) 1701. As the nineteenth century progressed and the population increased, many proprietary chapels were built in the town, both Anglican and Independent. Many of the pews were rented to wealthy worshippers to provide an income for their ministers, however, and the poor of the town therefore had to crowd into the the old parish church and the few free sittings that were available. It was to remedy this situation that Henry and Arthur Wagner (q.v.) embarked, at great personal expense, on a massive church building scheme from the 1830s until the 1870s.
The first Catholic place of worship to be established in Brighton since the Reformation was a temporary chapel in Prospect Row (later part of St James’s Street ) in about 1800, but it was replaced in 1806 by a permanent chapel in High Street. As the nineteenth century progressed so the ‘Anglo-Catholic’ movement (variously known as ‘The High Church’, ‘The Oxford Movement’, ‘Puseyism’, ‘Ritualism’ or ‘Tractarianism’) became more prominent as a reaction to non-conformity; it aroused considerable passion, anger, and even violence among many Protestants. In Brighton the arguments centred chiefly around the Revd Arthur Wagner, the curate of the lavishly decorated St Paul’s Church which was opened in 1848 by an ornate ceremony in marked contrast to other Brighton churches. Rituals, chanting and confessions were practised, and Wagner founded an order of Protestant nuns in Queen Square. He opened other ‘High’ churches at the Annunciation, St Bartholomew’s and St Martin’s, and was even shot at. St James’s and St Michael’s Churches were also involved, while some classically-designed churches were transformed into a ‘more acceptable’ Gothic style. It was not until the 1900s that the passionate feeling between High and Low Church in the town died down.
Brighton is now divided into twenty Anglican parishes (St Peter’s is the Brighton Parish), and is a rural deanery within the Archdeaconry and Diocese of Chichester, Province of Canterbury. Brighton is also a Roman Catholic deanery within the Diocese of Arundel and Brighton, which was formed on 28 May 1965 in the new Province of Southwark.