You are here: HomenextTopicsnextSportnextFootballnextBrighton and Hove Albion FCnextA potted history 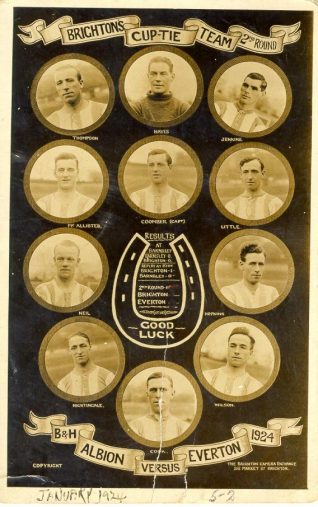 a) HISTORY: The first professional football team in the area was Brighton United, a Southern League team which played at the County Ground from 1898 until 1900 but was forced to disband towards the end of its second season owing to financial difficulties. An amateur team including some former United players, Brighton and Hove Rangers, was formed in 1900 and played on the site of Surrenden Field at Home Farm, Withdean. It was successful enough to be elected to the Southern League’s Second Division, but it too collapsed in the spring of 1901.

The former manager of Brighton United, John Jackson, determined to continue the progress that had been made and called a public meeting at the Seven Stars public house (now the Helsinki) in Ship Street on 24 June 1901 at which the present Brighton & Hove Albion club was formed (although it was briefly known as Brighton & Hove United).

Matches were played at the County Ground in 1901-2, but they moved to the Goldstone Ground for the following season and won promotion to the first division. The ‘Albion’ then struggled somewhat, but in 1909-10 they won the Southern League championship, and, on 5 September 1910, defeated Football League champions Aston Villa 1-0 at Stamford Bridge to win the F.A. Charity Shield and be dubbed ‘Champions of All England’.

The club closed down from 1915 until 1919 but became founder members of the Football League Third Division (South) in 1920. Although consistently in the upper half of the table, the Albion’s chief successes during the 1920s and 1930s were in the F.A. Cup where there were a number of giant-killing successes, notably on 2 February 1924 when Everton were beaten 5-2 and in 1932-3 when they progressed from the first qualifying round (because of a forgotten application) to the fifth round proper, a total of eleven matches. During the Second World War Albion competed in the Football League (South), Regional League (South) and London War League. The Football League recommenced in 1946, but in 1948 Albion were forced to apply for re-election for the only time.

After several near misses in the 1950s, promotion to the second division finally came in 1958. Five years later, however, the club found itself in the fourth division. The championship was won in 1965, and in 1972 the second division was regained but this success was short lived. In 1977 promotion to the second division was achieved for the third time, and, on 5 May 1979, an historic victory at Newcastle ensured promotion to the first division, a status that was maintained for four years. Although the team was relegated in 1983, the greatest day in the club’s history came on 21 May 1983 when they drew 2-2 with Manchester United in the F.A. Cup final at Wembley, watched by 100,000 spectators and an estimated 600 million people on television worldwide. The replay was lost 0-4, and the club has since had to rise once again from the third division.

The Goldstone Ground itself dates from 7 September 1901 when it was first used by Hove F.C.; the field was previously part of Goldstone Farm. The Albion first played there on 22 February 1902, and it became their permanent home the following season. The West Stand dates from 1958, although the southern section was added a little later. The North Stand was built in 1984, and the South Stand dates from 1954; it became all-seated in 1980. The ground’s floodlights were inaugurated on 10 April 1961. {123}