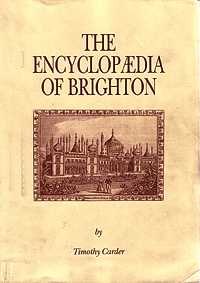 The Encyclopaedia of Brighton, by Timothy Carder, is an invaluable reference book about the history of Brighton.

There are entries on major topics such as the Palace Pier, the Royal Pavilion and the history of the railway – and the book also goes down to such detail that you can also look up your own street!

The Encyclopaedia was first published by East Sussex County Libraries in 1990. The print run has far exceeded expectations.

In 1994, Tim Carder gave permission for an electronic version of the Encyclopaedia to be included in the original ‘My Brighton’ exhibit in Brighton Museum.  In 2006, he gave permission for Encyclopaedia entries to be included in the My Brighton and Hove website.  The massive task of adding these entries to the site, illustrated with new and old photographs, is being undertaken by a team of volunteers throughout 2007.