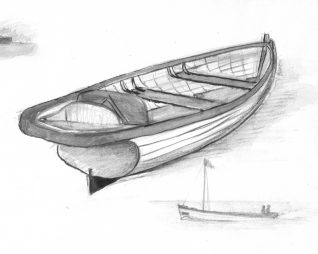 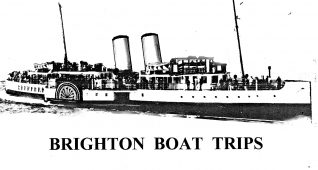 The steamers which plied from the landing stages of the two piers were certainly the aristocrats of Brighton’s maritime vessels, and probably deserved to be called ‘ships’!  However there were many other craft plying their trade.  My pre-war memories are of trips in a rowing boat.  The boat would be stationed half in the water and half on the shingle while the owner shouted a demand for passengers.

Memories of the ‘crew’
When the ‘crew’ was complete the oarsman would push the boat into deeper water, then jump aboard with very wet feet and take the oars.  As a child I used to wonder what would happen to us if he missed his leap.  It never happened!  Another memory is of the oarsman lighting up a rolled cigarette at the start of the trip and not touching it again.  It burned down to nothing on his weather hardened lips.

The war ended our fun
When the war came of course there was an abrupt end to all things aquatic. The piers were closed and cut in two to thwart possible invaders.  For the same reason the beaches were mined and the promenade sealed off with posts, concrete blocks and line after line of coiled barbed wire.

After the war
When victory came, and all the impediments were cleared, there was an enormous appetite for the resumption of boat trips.  There had been steamers plying for trade from the 19th century and these resumed, as did the rowing boats.  However there is an interesting connection to the war with the medium and large motor vessels which also worked from the beach.  The largest two were named “Montgomery” and “Alexander” after the British military heroes.  And of course many boats of all sizes carried plaques to mark their part in rescuing our troops from the beaches of Dunkirk.

Popular paddle steamers
So to the steamers, always popular, especially the paddle steamer.  Day trips to the Isle of Wight and back were a great favourite.  I remember going on the first trip there after the war.  The first stop was at Worthing Pier to take on more passengers.  Suddenly there was a very loud bang, just like a gun.  One of the very thick mooring ropes had snapped and sent the two ends flying like a whiplash.  No casualties luckily, so we continued on our way.  The Isle of Wight was most welcoming, and a splendid brass band was playing as we pulled into the jetty at Ventnor.  A great day out which was to become a very regular feature of the steamer programme.

Fish and chips on the return journey
Having got a wonderful appetite in the bracing sea air, fish and chips were consumed on the return journey, together with a pot of tea and as much bread and jam as you could eat.  A big plus in those days!  As well as also cruising via Eastbourne and Hastings piers, the itinerary eventually included trips across the Channel to France.  To this day I have never understood why such a splendid way of spending a day out faded away and now is just a wistful memory.