You are here: HomenextTopicsnextTransportnextBusesnextWorking for Southdown in the 1930s

Working for Southdown in the 1930s

I am writing from New Jersey, in the US, at the age of 85. I lived at 7 Firle Road from 1928 on, and was pushed out of St Luke’s Senior Boys School at the age of 14, near the end of 1936. My mother saw an advertisement by Southdown Omnibus Company in the Evening Argus, seeking to employ ‘apprentices’ and took me on a Tillings bus to the Victoria Road works, about 5 miles from home. Here she signed me up to be taught ‘engineering’ for which I was to be paid tuppence (two pence) an hour for a 48-hour week. 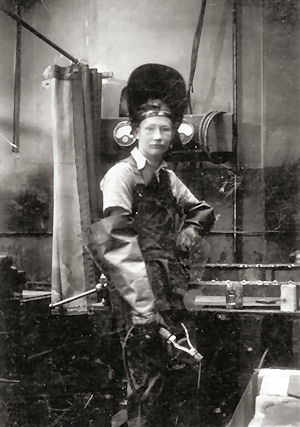 Robert in the arc welding shop at Southdown

A very long working day
This week consisted of five days of eight and a half hours each, and half a day on Saturday, of four and a half hours. To work in Portslade required me to rise at 6:30, walk (often run) down to the Level and board one of three buses that transported workers to Portslade (and back in the evening) for a penny a day. The bus ride home took me to the Level again, and I then walked up to the top of Freshfield Road, arriving home, tired and hungry at about 7:15pm.

Pay raised by a penny and hour
At the ‘works’ I answered at first to Harold Smith, who was responsible under foreman Jack Daniels, for reconditioning cylinder heads for the six-cylinder engines in most Southdown buses, made by Leyland. Later, I worked for Ernie Sibley, an expert engine fitter, who reassembled complete engines that were also being reconditioned or overhauled. At the end of a year of satisfactory service, each apprentice received a raise in pay of a penny an hour.

Joined the RAF
After a couple of years, I was sent to learn welding with Bert Edwards, from Lancing, and began to ride a second-hand bicycle to Portslade to save the sixpence a week of the bus fares. That was when I joined the Brighton Excelsior Cycling Club. War was declared in September of 1939 and in November I turned 17. I went to work at Crawley Aircraft Company, making gun turrets, and later joined the RAF to be trained as a Flight Engineer.

Southdown was a thriving business
I believe the works has been demolished, but in my day it was a solid business, with regular reception of buses to be overhauled and or repaired, and large shops or areas for dismantling and re-assembly of engines, gearboxes, axles and other parts, a machine shop, an engine shop, a blacksmith’s forge, and a paint shop, and several hundred men worked there.