You are here: HomenextTopicsnextTransportnextBusesnextSchoolboy fun on Southdown buses 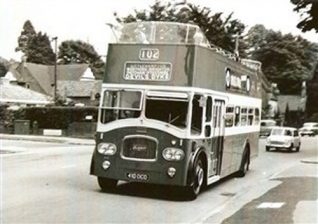 zoom
Southdown 410, a convertible open-topper
From the private collection of Martin Nimmo

I remember taking the green Southdown bus every day to school with my brothers when I was old enough in the 1950s. We used to catch it in Dyke Road from the top of Tongdean Lane and travel down the Dyke Road to get off at Port Hall Road opposite the park. In the summer months the number 27 open top bus would run on that route too so we’d really travel to school and home in style, albeit with hair even more windswept and scruffy than normal. It ran on a route right up to The Dyke and back in to town.

We mostly sat on the lower deck on the longitudinal seats nearest the platform. We used to chat to the bus conductors who stood all day on the platform at the foot of the stairs. We had good fun with them. We were blessed with a particular bus conductor who would regularly open his ticket machine and give us the tail end of his roll of bus tickets. As you can imagine this was of very special interest to the other boys in the playground at school. In those days the tickets were dispensed by the conductor winding a handle on the side of the machine. The conductors wore the ticket machine around their neck hanging to their left side and a leather money bag hanging around their neck hanging to their right so the leather straps crossed over in the middle of their back.

A particularly kind conductor would entertain us by taking off his ticket machine and his leather bag (no mean feat between bus tops) then whilst holding on the two handrails either side of the entrance to the lower deck, would do backward and forward somersaults often cheered on by us to do more. On days when I travelled with my mum and two brothers to go shopping in town or to the beach Mum would ask the conductor for ‘One and three halves’ to the Clock Tower or wherever, meaning full price for my mum and half price for us boys.

After years of riding the same route we noticed a new bus conductor who would signal to the driver when there were no passengers to get off so there was no need to stop at the bus stop. I suppose this would get them to their rest break early so more time for a cigarette and a glance at the Daily Mirror. Mostly this would be by two rings of the bell, but on occasions when he was upstairs at the front and not near a bell push he would simply stamp twice on the floor above the driver’s cab. I remember one afternoon on the way home from school my brother and I were sitting on the top deck at the very front and thought we’d give this a try. To the astonishment of the poor man at the bus stop the bus went steaming past, leaving him standing there with a dropped jaw and us with the biggest laugh ever.