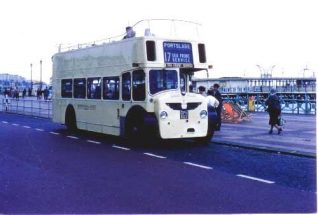 This is a good photo of an open top ‘Bristol Lodekka’ bus on No 17 Route at the then Palace Pier.

This was one of eight new buses (numbered OPN 801 to 808), most of which I believe were used on No 38 route from Coombe Road to West Street (later Pool Valley) in the normal red and cream Brighton Hove & District livery.

This is a rare photograph as it shows these strange looking buses without the later-fitted front radiator grille. They were new in 1959, the year I moved to Brighton as a nine year old, and served throughout the 60’s