You are here: HomenextTopicsnextTransportnextRailwaysnextThe line from London: 1841 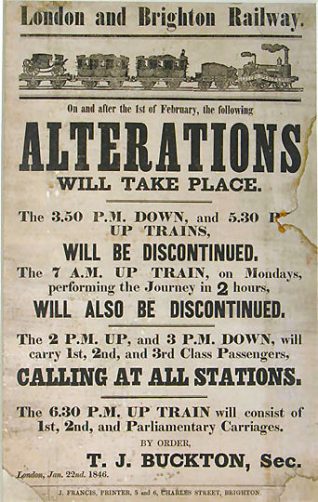 zoom
This is a paper poster with black print advertising timetable alterations for London and Brighton Railway from the 1 February 1846, by order of the secretary T. J. Buckton on 22 January 1846. There is an illustration of an early steam train across the top of the poster. The poster was printed by J. Francis in Brighton.
Image reproduced with kind permission of The Royal Pavilion and Museums Brighton and Hove

Some ninety years after Brighton was established as a fashionable resort, the arrival of the railway from London in 1841 brought great changes to the town, the effect of which can best be seen from the relevant census figures: the population rise in the period 1831-41 was 15%; in 1841-51 it was 41%. Heavy industry arrived as the London, Brighton and South Coast Railway Company established virtually all its engineering works in the town, and large areas of housing, mainly for manual workers, were developed around the station and in the Hanover area. The status of the visitor also changed somewhat as less affluent day-trippers came down from London in large numbers, and distinct seasons became established, the summer for the masses and the autumn and winter for wealthier society. Commuters to the capital used the trains from the start in 1841, and their numbers increased significantly with main line electrification in the 1930s. Only since the 1950s, with the mass availability of the motor-car and the closure of the railway works, has the importance of the railway to Brighton at all declined.
The development of the various lines and services is described in the entries following. See also “Devil’s Dyke”, “Kemp Town Railway”, “Rottingdean Railway” and “Volk’s Electric Railway”.

a) COMPANIES and GROUPINGS: The main line to London and the branches to Shoreham and Lewes were constructed by the London and Brighton Railway Company. Mainly owing to financial considerations, the London, Brighton and South Coast Railway Company was formed under an Act of Parliament of July 1846 by amalgamating the London and Brighton; London and Croydon; Croydon and Epsom; Brighton, Lewes and Hastings; and the Brighton and Chichester railway companies. The London, Brighton and SouthCoast had 457 miles of track, covering most of Sussex and much of south London and Surrey, when on 1 January 1923 it was amalgamated with many other companies into the Southern Railway. This grouping lasted twenty-five years before it was nationalised as the Southern Region of British Railways on 1 January 1948.