You are here: HomenextTopicsnextTransportnextRailwaysnextAbandoned railway projects 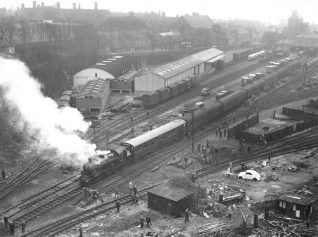 zoom
Kemp town Station and yard - 22 March 1964 - with a visiting 'Rail Enthusiasts Special'. Brighton College can be seen lying behind Sutherland Road. Click on the image to see a full-sized version
Photo from the private collection of Brian Matthews

The Acts of Parliament authorising the construction and abandonment of two Brighton-related railway projects that never came about are among those the Law Commission is proposing to repeal. To build railways in Victorian England it was necessary to present a Bill to parliament, which became an Act authorising the raising of capital, the acquisition of land and the construction of the railway and its associated infrastructure. If the project did not proceed, another Act was needed to repeal the first Act.

Law Commission review
Although the original authorising Acts were thus removed from the Statute Book, the abandonment Acts—and there are around 140 of them—are still in force, albeit to no practical purpose. The Law Commission, in its review of statute law, proposes the repeal of all such Acts. The consultation document (deadline for comments: 9 September 2009) provides useful information about the railways that never were.

Railway to the Steine
The first was the South-eastern and London, Chatham and Dover (London, Lewes, and Brighton) Railways Act of 1866. This authorised the construction of five lines branching off the main London to Dover railway, each following on from the previous section, the last of which would have run from the parish of St Ann in Lewes to a point on the east side of the Steine Gardens in Brighton. This would have given the town a second rail terminus, to complement the main line station at the top of Queen’s Road, which opened in 1840. It proved impossible for the promoters of the scheme to raise the money and two years later, in 1868 the London, Lewes, and Brighton Railways Abandonment Act was passed to abolish the scheme.

Along the coast to Newhaven
In 1886 parliament passed the Brighton Rottingdean and Newhaven Direct Railway Act. This line was to run from a junction approximately six chains from the northern end of the platform ramp of Kemp Town railway station for a distance of five furlongs and three chains to ‘a point distant 123 yards or thereabouts measured in a northerly direction from the northernmost boundary fence of the field numbered 52 on the 25-inch ordnance map’.

An easterly direction
It would then run in an easterly direction for seven miles, seven furlongs, two chains and 40 links to a junction with the Lewes, Newhaven and Seaford branch of the London Brighton and South Coast Railway in Denton. This would have taken the line along a route that began between Kemp Town station and the tunnel, across Sutherland Road, behind Brighton College and then not far from the coast all the way to Newhaven.

Scheme foundered
Three more amending Acts were passed in 1887, 1889 and 1893, which suggests that the project made some progress. Plans were drawn up, surveys conducted and some contracts agreed. However, the scheme foundered and was abandoned in 1894, when a fifth and final Act was passed to wind up the Brighton Rottingdean and Newhaven Direct Railway Company. But what a useful railway it might have been. It would have allowed for stations not only at Rottingdean but also at Saltdean and Peacehaven when they were developed.

Imperial measurements of distance
A mile is divided into eight furlongs, which in turn consists of 10 chains. A chain is 22 yards long (the length of a cricket pitch) and is divided into 100 links. Chains are still used to measure distances on railways. Look on any bridge, for example, and you will see a modern plaque that shows the distance from the start of the line in miles and chains.