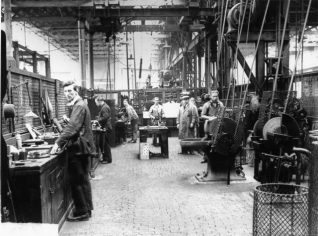 zoom
Brighton Railway Works, 1928: At its peak in 1891, Brighton Railway Works employed 2,651 people building, painting and maintaining locomotives and carriages for the London, Brighton and South Coast Railway. Following the formation of Southern Railway in 1923, the workshops focussed on repair work, but during and after the Second World War steam and later diesel-electric locomotives were built, the last on 30 March 1957. The works closed in 1958 and were demolished in 1969.
Image reproduced with kind permission from Brighton and Hove in Pictures by Brighton and Hove City Council 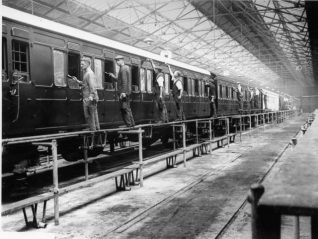 zoom
Painting Carriages at Brighton Railway Works, 1928: A team of men painting carriages by hand at the Brighton railway paint shop. The paint shop was built in 1878 to the north of Old Shoreham Road, and soon after this photograph was converted into an electric stock maintenance centre.
Image reproduced with kind permission from Brighton and Hove in Pictures by Brighton and Hove City Council

a) ESTABLISHMENT: The Brighton Railway Works occupied a large area between the main line and Boston Street, and originated at the end of 1842 when the maintenance of London and Brighton Railway stock was concentrated in the town. Carriages were fabricated from 1848, but the main locomotive  manufacturing works, and the principal maintenance and repair shops of the L.B.S.C.R. were established in 1852 by the superintendent engineer, John Chester Craven. Originally intended for Horley, these workshops were the first centre of heavy industry to be established in the town.

b) EXPANSION: In 1854 a new wheel shop was opened, and further additions were made in 1860 and 1870. In 1870 William Stroudley became superintendent engineer and standardised locomotive production to just six classes with interchangeable parts; a green livery was also introduced, and locomotives were given individual names. A new iron foundry was added in 1873, and the works were extended to the north of Old Shoreham Road when carriage-painting and cleaning shops were built in 1878. The Brighton works also handled marine engineering for the company’s cross-Channel fleet, although the steamer workshops were moved to Newhaven in 1880.
Stroudley died in 1889 (the stained-glass windows from his villa in Preston Road are exhibited at the Bluebell Railway) and was succeeded by R.J.Billington who immediately extended the works out on columns over the lower goods-yard line. Manufacture was concentrated in the original portion and produced about twelve locomotives annually. By 1891 2,651 people were employed at the railway works; there was a railway institute and library at the works, reached from Peel Place, and a railway mission in Viaduct Road.