You are here: HomenextTopicsnextViews of the city: images & opinionsnextChristmasnextSchool Christmas traditions in the 1950s

School Christmas traditions in the 1950s 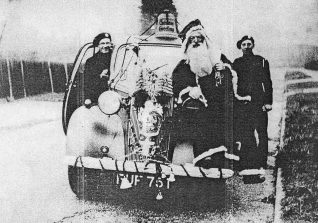 zoom
Wartime Christmas
From the private collection of Mr.M Spratt 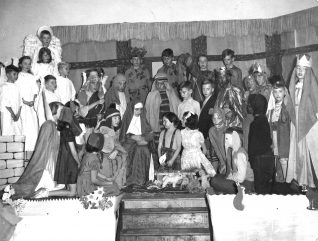 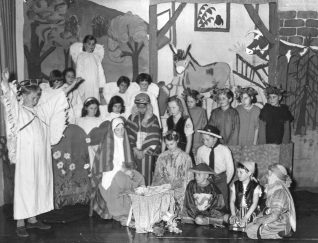 Christmas at Hertford Infants’ school (then County First School) by the 1950’s had its own longstanding traditions and treats. On a Sunday afternoon in early December a large Christmas tree would be decorated, ready for the children’s parties. Rehearsals for a Carol Service at St.Matthias would begin with the older children practising their spoken scripture and solos. The whole school and parents attended and in 1953, with a school of over 370 pupils St. Matthias was “so packed that the children had to sit on hassocks and adults stood in the doorway.”

Fancy dress and Christmas Parties
The class Christmas parties were held in the evenings and the children were allowed to wear fancy dress – a great treat! A parent remembers the excitement of making her children’s costumes – a clown suit made of old bedspreads, a brown paper ‘parcel’ outfit complete with stamps and string, a “Walkie talkie” doll, a Red Indian with full headdress of feathers. For days beforehand parents brought the party food into school, including jellies and blancmanges, cakes and biscuits, as excitement mounted.

Sleigh Bells in the playground
At each party the children would sit in the hall with the lights out, to listen out for sleigh bells getting nearer, then a light would be seen bobbing along the veranda outside and suddenly there was Father Christmas in the doorway. He was greeted by such excitement and screams of delight, to distribute a named present to every child (provided, wrapped and labelled by their parents). After the parties, before the end of term came Christmas dinner in the school canteen, with fancy hats for each child and special table decorations. Despite the cold in the canteen building and the need for sacking to make the concrete floor bearable “much jollification was had by all!”

A poignant story
The 1954 Christmas parties had a special significance for highlighting one teacher’s commitment to the school. The Argus carried the poignant story of Miss Gladys Bradby, a dedicated Assistant Teacher for 23 years, who had planned a party for December 21st as a gift to the children to mark her retirement, with entertainment by a ventriloquist and sugar sticks to take home. Sadly Miss Bradby died on 12th December but it was reported that her last words were “The Christmas party must go on,” which indeed it did.

Christmas on several sites
Later in the 1950’s, when the school numbers became overflowing, Christmas included a Nativity play for the Reception classes, by this time based in St. Richard’s church hall, and performances in the annexe of the Davey Drive (later St. Joseph’s) school, to which the upper school had been relocated. These arrangements stood for several years, and the Heads spent much of their time travelling between the various parts of the school!

Ice Sliding
After Christmas, the winter weather made the open air veranda at the main school hard work. The cisterns to the toilets regularly froze and needed constant flushing throughout the day with buckets of hot water by the Caretaker, to keep them working. However cold and ice also brought the popular Hertford tradition of sliding in the playground – for which perilous activity classes were officially given extra time before school started.  Miss Young, Headmistress, reported on 19th Jan 1954 that “as playground conditions were favourable for sliding, extra time was given to those children wishing to do so before school began – Class 7 continued sliding until 9.20am.”  Enthusiasm for sliding was not restricted only to the children, teacher Mr. Hickman, (later Head teacher!) would be outside in his long dark overcoat and scarf, and tow lines of screaming children along the ice slide. Children even came in early on those days!