You are here: HomenextTopicsnextViews of the city: images & opinionsnextElectionsnextHistory Notes 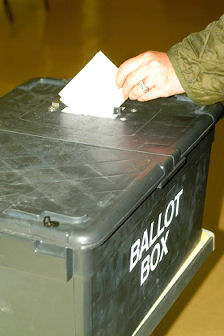 zoom
From a private collection

Until 1832, Brighton was represented only by the two Members of Parliament elected for the whole of the county of Sussex, but in that year the Representation of the People Act (the ‘Great Reform Act’) created the Parliamentary Borough of Brighton, entitled to send its own two Members to Westminster. The new borough consisted of the parishes of Brighton and Hove, and had a population of about 41,000 although only 1,649 were eligible to vote at the 1832 general election. Preston was added in 1868, and Aldrington in 1918 when Preston Rural (that part of Preston to the west of Dyke Road ) was removed.

The parliamentary borough remained unaltered even though municipal boundaries were greatly extended in 1928; the peak electorate was reached at the general election of 14 November 1935 when 129,356 voters were registered. In 1949 the whole county borough was divided into two borough constituencies, Kemp Town and Pavilion each returning one Member, and Hove became a separate constituency; Stanmer was added to Pavilion constituency by 1955. The Round Hill area, together with Preston Barracks and the Parkway, Coldean , was transferred from Kemptown to Pavilion prior to the election of 1983, such that the dividing line now runs along the eastern side of Old Steine , Grand Parade and Lewes Road. {1,109}

There have been forty general elections and seventeen by-elections in the period from 1832 until 1987, although nine of the by-elections were uncontested. The highest majority ever achieved at a British parliamentary election was 62,253 by Sir Cooper Rawson (Conservative) over his nearest opponent on 27 October 1931 {299}. The longest serving M.P. was Captain George Tryon (Conservative) for thirty years from 1910 until 1940. Having been defeated in 1906, he won nine elections, also the most. The shortest serving was David Smith (Conservative), who won the seat at the general election of 25 November 1885 but died after eleven months. Only Isaac Wigney (Liberal), elected in 1832 and 1841, but defeated in 1837, has ever regained his seat.

Brighton’s representatives were mostly Liberal until the 1880s, but have been virtually all Conservative since. In 1905 a Liberal won a sensational by-election victory, a success that was repeated in the 1906 general election, and in 1964 Dennis Hobden took Kemptown, the only Sussex seat ever won by Labour; having proved victorious by just seven votes after seven recounts, Hobden held the seat in 1966 but lost it in 1970.