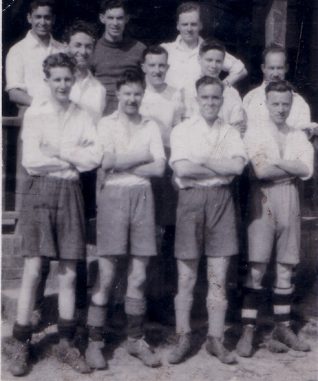 zoom
This is the Lewes Road Office Staff Football Team in the 1940's Back Row (LtoR)--- ?- Harwood- Ginger? Centre Row (LtoR)---Stoner-Christmas-Divall-Russell Bottom Row (LtoR)---Claridge-Hammond-?-Wingham - Click on the image to open a larger version in a new window
From the private collection of Desmond Divall

My first memories after leaving school are of starting work at Allen West, Lewes Road offices in 1942, where I began as office boy at a salary of 15 shillings & 2 pence (Today’s 75p), for a five and a half day working week. I worked in the Sales & Estimating office; my task was to sort various order documents of customer requirements passed to me from the salesmen. These were sorted into other departments and workshops, ready for distribution to Lewes Road, Coombe Road, or Moulsecoomb factory sites.

My immediate manager was Mr R. Pullen,who died a short after I began my job,and a Mr A. Anthony took over. The entire office was managed by Mr J. Hall and Director Mr P.C. Jones, in their own sub offices. A large area in the department contained the Order Filing Section, the domain of Miss Newry and her junior young lady filing clerks.

At this time, WWII security was vital and all employees were issued with identity passes which could be examined by gatekeepers and special policemen on entry to the various factory sites. Later the passes were replaced by identity lapel badges bearing the letters L, C, or M to mean the Lewes Rd., Coombe Rd. or Moulsecoomb factories.

I well remember a gatekeeper and policeman at the Dewe Road factory entrance being killed by the crash of an aircraft, following an air collision of friendly aircraft. Brighton and South Coast areas were raided several times by Nazi ‘Hit and Run’ aircraft which flew across the Channel from their bases in France. To warn of these attacks observers were based on tops of high buildings; they operated local sound ‘Pips’. One observer was based on the top of Coombe Road factory. All factories had their individual air raid shelters, and my particular one was situated in a Home Guard Blockhouse at the Lewes Road works.

Luckily the factories were not attacked, but I can remember seeing a deactivated bomb displayed in the palatial directors’ boardroom. Allen West produced many products used in wartime, both in WWI and WWII. In WWI there was the Mills Bomb Grenade and in WWII there was the naval ship deguassing gear to counteract the Nazi magnetic sea mines; control pillars for use with anti-aircraft predictors; submarine ventilation fan switchgear; seaport crane gear controllers; brake switchgear and numerous electric motor starters for wartime production factories.

Recruited to the RAF

You can download a Word document which lists departments and their personnel below.