In the war I remember the ‘doodle-bugs’ or ‘buzz-bombs’ as we knew them; the official name for them was the ‘V1 Flying Bomb’. The first one I saw absolutely terrified me; I was walking the dog on some allotments at the time. It was quite low and made a dreadful low droning noise which sort of vibrated. It looked like a small plane with a cylinder on its back. Of course the only flying things I had seen up till then were fighter planes and lots of bombers. I thought it was going to shoot me but it just kept on its steady slow way until it was out of sight. I didn’t know it was pilot less. What an invention for that time.

I was very used to watching fighters and bombers, and many kids knew every plane and could identify it, but not me – I was a girl and had little interest in things like that. I couldn’t help but know the common ones, and of course was able to recognise the markings of German planes. I knew that German fighters would dive and shoot kids, anyone, if they saw them as an easy target. I certainly would have been easy pickings, stuck up there on the top of a hill. But the doodle-bug  went on its way and I carried on with my walk. I must have been 13 or 14 years old at this time.

I remember another experience with doodle-bugs when I was in the Girls Life Brigade. We were camping and I was a corporal in charge of a tent full of little kids. We were there to help farmers get in the crops. The Germans very nearly got us that night. We were in bell tents around a field. We were all scared but I got all the kids singing – all night long we sang. When the engine stopped we all loudly counted to 10. We’d been told that if you counted and reached 10 then you’d know you weren’t going to be hit. It was supposed to be the time the bomb took to reach the ground.

Click on the photograph to open a large version in a new window. 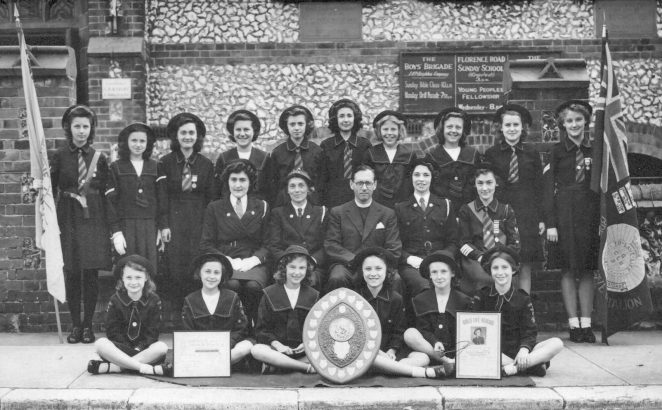 The Girls Life Brigade: I am holding the flag, first left standing

Work as usual next day

The captain of our group came round later and thanked us for keeping all the girls in other tents singing too, and counting with us. We had all cheered every time we reached ten. Hundreds of bombs came that night. Most of the engines stopped. And still we went to work next day as everyone who watched at night did. Later I learned that a house in Newick was hit, as was a farmhouse on the Lewes to Chailey road. Luckily it seemed that many of the bombs had missed targets and fallen in fields.