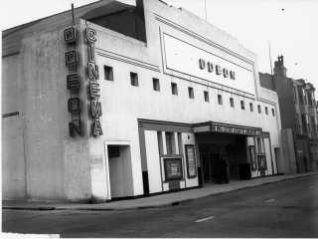 Because I lived in Walpole Road my cinema was the Odeon Kemp Town. [I] remember it was completely black at night time, no street lights or shop lights, so you had to have a torch to get to the cinema. And there were no lights in the cinema; you had to go through double doors. You went through one door and closed it behind you before you opened the next one where the lights were you see.

The Odeon in Kemp Town was our really worst incident. The cinema was full and a bomb fell through the roof and exploded in the middle of the seats; killed a lot of people there. People often say “You went to the Odeon and that was the one that the bomb hit?” We always used to say at the time: “Well, lightening doesn’t strike twice in the same place!” The other thing was that you were a darn site safer [inside].

It would come up on the screen “Air raid warning in progress” because you couldn’t hear anything over the sound of the film and when the pips went it had got “Raiders Imminent” on the screen.

Someone said to me “Didn’t you get out quick?”, well no because our guns were firing up at these planes [and because of] the shells which they fired, bits of jagged hot metal were coming down out of the sky. You were a darn site safer in the cinema than you would have been outside trying to get home.