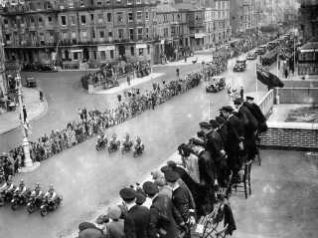 Extract from the diary of Tony Simmonds

Right up to 8 am I was ready to go to work today – even though I had been informed by Head Office that today was Victory Day no news had come through by the time I went to bed on the 14th. Thus at 7.30 this morning I got up as usual feeling a little disappointed and very tense – you never know there might be something on the 8 o’clock news but I wasn’t hoping for too much.

The music for ‘This weeks Composer’ ceased at 5 to eight and the usual ‘Life up your Hearts’ programme came on the air. I can truthfully say that I nearly swallowed my spoon when I heard a voice say ‘Life up your Hearts in this morning of final Victory’ ‘Did you hear that’ I shouted and we knew it was all over. The 8 o’clock news confirmed that today was Victory day and that today and tomorrow were to be a national holiday. That was 8 o’clock – by ten past 8 we had our flags out and the never to be forgotten day had started.

The one drawback in the morning was that it was raining – still Denny [Tony’s younger brother] and I braved the elements and went out. We came back soaking wet but with the news that the flags were out everywhere – there wasn’t much doing yet but still we didn’t expect it. The rain stopped in the afternoon and the family trooped out, Dennie and I with whistles in our pockets – Last time there was hardly anything doing in the afternoon, but, this time, the crowds were almost as big as on V.E. evening. The centre of attraction was at the bottom of West Street where a score or more of Dominion troops surrounded by literally thousands of people, were leading in patriotic songs. We joined in.

We decided no to go out as early in the evening as we did on V.E. Day but at 7.15 we trooped out heading for the Clock Tower. Even by 8 o’clock the fun exceeded even that on V.E. Day. Where all the fireworks came from remains a mystery – never before have I seen so many people jammed together in two streets. It was impossible even to guess how many shouting, singing, dancing clapping uproariously happy people were there. Every bus or car daring to invade the area was banged and rocked and ‘fireworked’. No bus left the area without its boards being missing – still they make a nice bonfire.

The first big bonfire was lit in a patch of waste land near the Prudential – on this was dumped all the material used to begin a fire at the top of West Street – a fire soon put out by Police – I think I led the ‘Boos’ that followed this action. Still the other bonfire soon made up for it. Denny and I now went off again up to the Clock Tower giving repeated blasts in our whistles – what hooligans – but still, even old men were blowing whistles and shaking rattles and every old dear was waving a flag. Then about 11.30 the fun really began.

A huge bonfire was lit at the bottom of West Street, every moveable piece of wood in the area was dumped on this fire. The Sports Stadium, the Odeon, Sherrys and the Harris Grill were all stripped of their advertisement boards – time and time again. The police tried to stop it bit they hadn’t the slightest chance against such a crowd. Then the N.F.S. arrived. In course of ten minutes, every moveable article on the lorry was dumped onto the fire – from hose pipes to doors. As a retaliation one Fireman drenched the crowd with showers of water.

The fire was as high as the buildings when Denny and I left at 1230. On the way home we saw other huge bonfires on the beach and smaller ones in almost every street – and around each bonfire danced hilariously happy people – men, women and children. That ended the most glorious evening of my life – the crowds weren’t riotous – on the whole very little damage was done – but just supremely happy that the greatest of all wars was over.