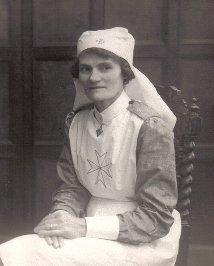 zoom
Photo: My mum in her St John's Ambulance uniform
From the private collection of Tony Viney 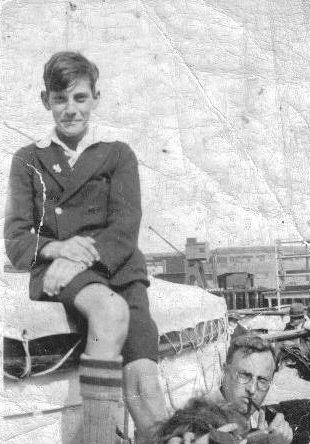 zoom
Photo: Those were the days!
From the private collection of Tony Viney

The Blackout
One of the things I remember about the outbreak of war was that an immediate blackout was imposed on all street and house lighting. Everyone had to find a means of blacking out their windows. Heavy light-proof curtains had to be found, and black Bolton sheeting was cleared out of the shops in no time. All car headlights had to have special filters fitted, although pro-tem, it was accepted if the top half of the glass and the bottom half of the reflector were painted black. Even my bicycle lamp had to be treated in the same way.

Trolley buses for trams
The trams were replaced with trolley buses from the beginning of September 1939. They followed the original tram routes in the main, but extended beyond the original terminus at the top of Ditchling Road, down into Hollingbury. They were much quieter than the rattly old trams, and had astonishing acceleration. The route to the top of Elm Grove and the racecourse was extended down Whitehawk Hill as far as the sea-front at Arundel Road.

It was not long before the old tracks were taken up so that the steel could be re-used for the war-effort. All the cast and wrought-iron railings were gradually taken down from the parks, and from people’s front gardens, with the promise of compensation at a later date. There were stories of huge piles of these railings still in existence many years later, not having been used to make munitions and tanks as was proposed.

Varndean school
At Varndean school, large air-raid shelters had been built into the side of the bank at the rear of the school, beneath the football field known as the Oval. At first, there were only “test” evacuations to these dark and damp tunnels, but as the German planes started their incursions, the sirens would sound, with their weird up-and-down warble, and the move into the shelters became more frequent. The boys did not mind the interruption to their lessons, and there was always an air of excitement, rather than any fear. There was a brief period when the school had to share its premises with a school that had been evacuated from London and one school worked in the morning, and the other during the afternoon.

Gas masks and sirens
Gas masks had been issued to everyone and had to be carried everywhere at all times. They were originally issued in a cardboard box with a string loop for carrying, but I found a metal canister for mine and painted it blue. The air-raid warnings were fairly frequent at first until the methods of detecting enemy aircraft were refined and the Royal Observer Corps was formed. Later on, while the normal sirens would sound as a general warning, the dash to the shelters could wait until a much higher pitched bleeping siren gave notice of an immediate threat of enemy planes close by.

The Civil Defence was formed to cope with the results of bombing raids. Volunteer Wardens were formed into small groups, each responsible for a small area of the town, based on a Warden’s Post (usually a reinforced basement). Their prime job was to patrol their area and enforce the blackout regulations, and the shout of “Put that light out!” became a by-word. A request was made for messengers to assist the Warden Service in case of damage to telephone lines in a raid, and I was just old enough to volunteer. Some training was given at school, and a large van arrived one day for gas training. Each volunteer had to put on his gas mask and enter the van, which was full of tear-gas, check that the mask was working, and then remove the mask immediately before leaving, to prove there actually was gas in there. They also had to sniff small phials of other gases, mustard gas and phosgene among them, to be able to identify them.

A messenger for the wardens
I was based on the Wardens’ Post at Circus Street, down in one corner of the basement, where the Head Warden was a Mr.Pester. He lived in Kingswood Flats just up the road with his wife and two children and was not liable to call-up into the Forces. From time to time tests were made with mock air-raids that would involve all the Civil Defence departments – the Wardens, the Police, the Ambulance service and the Fire service – and such heavy equipment as might be available from the local council yards. As a messenger, I had to jump on my bike with a message and go as quickly as possible to the main Control Centre, beneath a block of flats off the Lewes Road, where I would have to show my pass before being allowed down a ladder into the Centre below. After delivering the message, I would then have to remain available at the Centre to deliver messages elsewhere as required.

I was supposed to report to the Wardens’ Post whenever there was an air-raid warning but of course if I was at school this was not possible. I had been issued with an army-type gas mask, the one with two eye pieces and a rubber exit valve to breathe out, along with a steel helmet and because of this I was the envy of some of my schoolmates. My parents did not want me to go out on night calls. On quite a few occasions when the sirens sounded during the night, I would creep down to the landing window which opened easily and ease myself down to the roof over my parents’ bedroom. Then I would creep over the slates to the back wall, jump down into the backyard, and run off down to Circus Street.

Defence on the Downs
One day, posters went up, asking all available males to report to the Town Hall, to carry out a Civil Defence task. On arrival, they were put into lorries and taken up to the Downs north of the town and instructed to dig holes into which railway sleepers or telegraph poles were put. The idea was to deter enemy planes or gliders from landing, or if they did, to cause them considerable damage.

Leading the way to Roedean
I was on my bike one day when I was stopped and asked the way to Roedean School by a dispatch rider leading a long convoy of army vehicles. Since the route could not be direct as there were diversions around the gun-sites at the bottom of Lewes Crescent, I offered to lead them there. So I rode off with the large convoy following, until they could see the school buildings at Roedean, almost on the cliff edge, looking out over the Channel. An anti-aircraft battery was set up on the nearby Roedean pitch and putt golf course. These guns were bigger than the Oerlikon guns that were set up along the Marine Parade and made a lot more noise.

The threat from the sea
As the threat of invasion became apparent after the evacuation of British troops from Dunkirk, the beach was mined. Thousands of yards of barbed wire was draped along the sea-front, with large anti-tank traps consisting of large cubes of concrete at all vulnerable points, such as stairs and ramps. Visitors were banned along the coast, and even the inhabitants were restricted, needing a permit to approach the seafront streets after dark. My civil defence pass allowed me into this area but only if I was on duty or accompanied by a Warden. On clear nights with a southerly or southeasterly breeze, ‘gas’ warnings were given. The army clearly thought it possible that gas could be released from boats close offshore.

Rationing at the Express Dining Rooms
Some food rationing had been introduced at the beginning of the year (1940), starting with butter and sugar, to be followed a little later with restrictions on all staple foods, and Ration Books arrived. Business at The Express Dining Rooms run by my parents had bottomed, and with no visitors to produce a summer season, my father had to find work. He was employed digging trenches, and holes for air-raid shelters. My mother looked after the Dining Rooms, but there was very little trade. People were not accustomed to eating-out, other than on holiday. A Food Ministry was formed, and the local Manager turned out to be the Mr.Gray who used to stay with our family on his visits to Brighton as a traveling salesman, and he was generous with his initial allocations. These allocations however, were based on the amount of business done, and as there was little business, they were soon reduced.

Medical checks
It was at this time that I received instructions to attend a medical inspection in preparation to being called up for the Forces at seventeen. This took place in The Oddfellows’ Hall in Queens Road . After the usual prodding and thumping, and use of a stethoscope, I was asked to step up and down onto a low chair seat. This made me start to get breathless and the story of my asthma came out. After consideration, I was told I would be graded F4, which effectively kept me out of any military activity. I now had to get a job, and after an unsuccessful interview with an insurance office in New Road, the Juvenile Employment Bureau sent me along to Allen West & Co in Lewes Road. After a short interview there I was told I was accepted for employment at the East Moulescombe works and my working life began.