The Bombing of Park Crescent 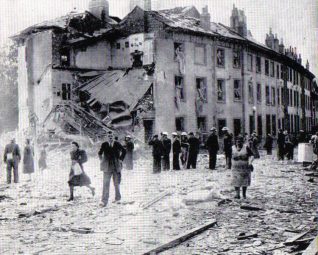 There were over 50 air raids on the town of Brighton during World War II. Many are well documented, like the “infamous” raid on the Odeon Kemp Town on Saturday 14th September 1940. Brighton was of little military importance, raids were indiscriminate, however German pilots would drop unused bombs after raids on London or more important targets as they flew back over the coast, homeward! Nearly 200 people were killed in these raids and 200 houses completely demolished. Of course there were hundreds of casualties, and damaged buildings ran into thousands. The biggest raid on Brighton was at lunchtime on 25th May 1943 when up-to 25 German planes flew in at low level. Bombs were dropped over a wide area, and the number of fatalities was 25 with over 50 serious injuries.

The photo of Park Crescent Brighton shows the aftermath of one of the 50 plus raids. The date is unknown, but hopefully someone can enlighten me! At first glance I thought the photo was taken from the north end of the Level, looking north up the Lewes Road. However further investigation, and with the aid of the 1946 map of bombs dropped on Brighton, it can be seen that the Park Crescent bomb dropped on the rear, north side of the Crescent. A section of the 1946 map indicates the actual position. Looking again at the photo, it must have been taken looking southwards towards the Level.