To Yorkshire and back to Brighton

In 1941 I, with my school, were evacuated to a small village in Yorkshire called Burton Leonard, where I was billeted with a family called Simpsons who had a son and daughter, both at Grammar school in Ripon. I went to the local school which was situated on the Village Green and I got friendly through a friend of mine, with a farmer who let us ride on his tractor and who taught us to milk cows.

Father killed in a bombing
I had been in Yorkshire for only about two to three months when I was told that my house in Edward Street had been bombed and my father killed.  Fortunately my mother was not in the house.  She then came up to Yorkshire and after a short stay we went back to live with my married sister in Hove where we stayed until the end of the war.

Passed my scholarship
In the meantime I passed the scholarship to go to the Brighton Intermediate School which was situated in Pelham Street off Trafalgar Street.  As I lived in Hove I had quite a journey to and from school, usually by bicycle owned by my brother, which had very little by way of brakes or tyre tread. 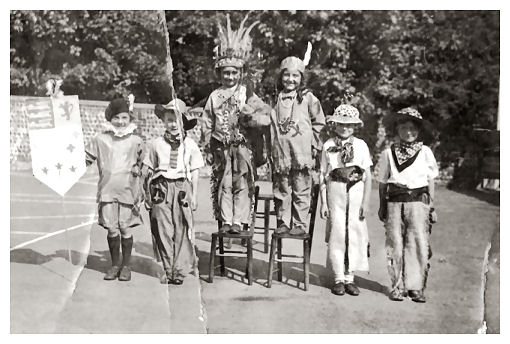 Fancy dress for the Coronation

A narrow escape
It was during one of my journeys home that I had a narrow escape as I was about 10 yards from the tunnel, which went under the railway line at Aldringham Halt, when a German plane dived down to machine gun a train.  Fortunately all the bullets and the bomb he dropped all landed in a garden on the other side of the cutting.  I just got showered in dirt, picked up my bike and continued home. That was the end of it, no counselling in those days!

Back to Tillstone Street
We continued to live with my sister, her husband and the two girls who where born during the war, one of whom I have stayed in on my visits back to the UK.  It was during 1941 that we learnt that my brother John, who was a sergeant in the army, had been taken prisoner by the Japanese in Borneo.  We had I think about two pre-printed cards from him until he came home in 1945, having lost most of his eyesight through malnutrition.  After the war my mother, brother and I went back to live in Tillstone Street.