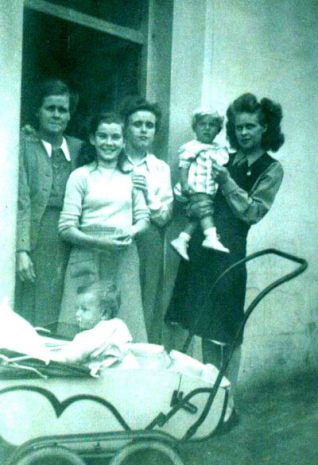 zoom
The Bailey Family at 15 Regent Hill Brighton. The photograph shows the famous pram with my son Trevor sitting in it. From left to right is my Mother Angnes, Evelyn, me, Kathleen and my sister Dorothy holding her son Michael.
From the private collection of Mrs Kathleen A. Kis (nee Bailey)

My family
There were five children in the family with my elder brother in the army and my two elder sisters stationed in Brighton with the WAF.  That left me and my younger sister. I was a young girl when the war started and often given the task of minding my elder (Barbara) sister’s daughter, a task I loved as I proudly paraded her daughter (Sandra) about in a large cream pram which seemed the size of a double-decker bus to me.

Visiting our aunt
On one such outing my mother and I were shopping and decided to visit an aunt who worked in a sweetshop at the top of St James’s Street, (may have been a Maynard’s) just opposite the church at the top. We must have been no more than five yards from the shop on the other side of the road when we were both stopped in our tracks!  From where we were standing you could see virtually the whole length of St James Street to the bottom.

A terrifying sight
In the distance we could hear this almighty rumble, low and behold there was a German plane slowly starting to come up from the bottom of the street with its guns blazing!  My mother and I froze as the plane worked it way up the street in what seemed slow motion. The momentary shock was soon over with my mother grabbing the baby and me and dragging us across the street into the sweet shop.  The three of us collapsed in a heap on the floor with my Aunt looking on in total panic!

Bullets bouncing
Still in a state of bewilderment I could hear the machine gun bullets bouncing of the pavement and ricocheting off the surrounding buildings!  Finally the dull roar of the plane disappeared and we regained our wits, what was left of them! We never did find out what the plane was but were told it was probably a Messerschmitt.

Mother’s action saved the day!
On returning to the street we saw the pram intact but with a complete line of bullets right through the middle of the pram, there was no other damage just this line of bullets!  Well you can imagine the conversation; we were soon surrounded with a crowd of people who all gave my mother a big pat on the shoulder for her quick actions! As money and prams were short supply during the war we continued to use the pram, the stories my mother and I had to tell about the episode were priceless!

The famous pram
I continued to use the pram when my son was born in 1946 and everyone in the neighbourhood knew the story of the famous pram back to front!  Unfortunately the pram is long gone but the memory of that day lives on.