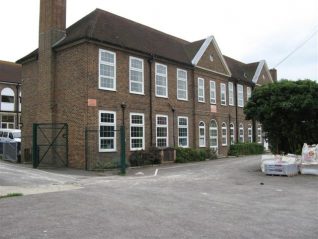 zoom
Moulsecoomb Senior Boys' School this end, girls' the other. The allotments were across the lane at this end of the school. Also at the foot of that lane was a temporary mortuary, situated up the lane above the allotments.
Photo by Ron Spicer.

During the war, Churchill’s call to dig for victory was answered at Moulsecoomb School. The teachers at the senior school took turns in escorting their pupils to the allotments across the way by the old mortuary building.

Class allotments
So far as I’m aware, each class had its own special allotment to cultivate and, without at first realising it, the teachers soon became aware of the fact that their poor pupils out of necessity were used to cultivating crops so they more or less ceased to advise on what to do! I can’t imagine such areas totally open to anyone, as they were, remaining without vandalism nowadays.