I was born in Brighton in 1931, so at the outbreak of war on the 3rd of September 1939, I was 8 years old. I can remember the air raid siren sounding on that day, and going outside in the bright sunshine, to see what was going on.

The ‘phoney war’
My brother John, who was 10 years old than me and in the Territorial Army, had already been called up on 1st of September.  Of course for the next few months nothing happened, this period was known as ‘the phoney war’. But when the blitz on London started, we would see the German planes going over and then about one hour later returning. If they had any bombs left after their raid, they would drop them on any lights left they saw. It was about this time, that my brother was injured in London; his job in the army was to repair AA guns. Fortunately he recovered he recovered from his injuries. By this time of course, France had fallen and Brighton received the occasional straffing and bombing, by German fighters stationed in France. 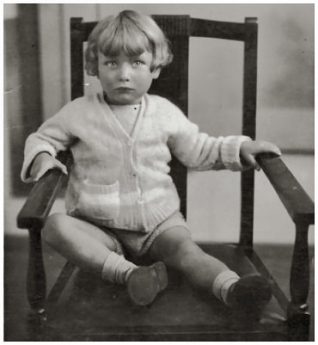 At three years old and not very happy being photographed

Bombing of the Odeon cinema
One of the worst Brighton bombings occurred on Saturday the 14th of September 1940. The Odeon cinema in Kemp Town suffered a direct hit during a matinee performance of a film. That Saturday afternoon I was in the Odeon, watching a film called ‘The Ghost Comes Home’. I was with a friend called Bobby Ward, who lived just around the corner to the cinema.  He fortunately was not injured, but a piece of shrapnel embedded itself in my head.

Clear recollections
The events of that afternoon are still as clear as if it had only happened yesterday. My first recollection was of being burned and everything was red.  I then pushed up (having been partially buried in plaster and dust) and then everything went grey.  I put my hand to my head which was covered in blood and immediately started to cry, being only 9 years old.

Rescued by a vicar
My clothes were ripped to pieces and I had various cuts and bruises. Suddenly the fire exit door opened and the first person I saw was a vicar who came straight to me and carried me outside. My friend’s father was waiting in his car, and he took me to the Sussex County Hospital which fortunately was just up the road.  I can remember saying to Mr Ward that it was a good job his car seats were red as by this time I was getting blood on them.

Surgery to remove the shrapnel
After spending a while in the Outpatients Department, where my mother saw me, I was taken over the road to the operating theatre. Much to my displeasure, they anaesthetised me and proceeded to extract the piece of shrapnel embedded in my skull.  Fortunately I have a thick skull so it had only just reached my brain.  I spent the next three weeks in the Sussex County Hospital in a ward with about 30 females, as the men’s ward was full. 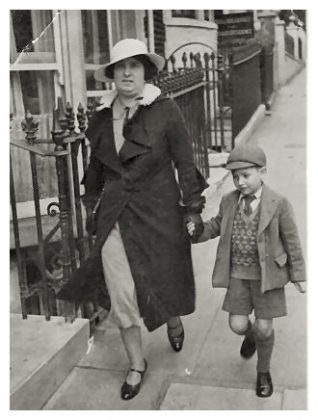 In my school uniform with my Mum

Scrounging chocolate
As I was on the danger list my mother was allowed to visit whenever she liked which she usually did. She would arrive with as much chocolate as she could scrounge from friends and neighbours. In those days of course, two ounces per week, per person, was the ration.
In 1940, Brighton was still at the receiving end of bombers who would release all onboard bombs just before crossing the Channel. The resulting weight loss increased maneuverability and their chances of survival.  I can remember a poor girl being brought into the ward after an attack, completely covered in thick black oil.

Back to school
After I recovered I was taken to Hayward’s Heath Hospital for an assessment, which I fortunately passed. Then it was back to school in St Marys in Mount Street where when the siren went off we had to troop down the road to the cellars underneath the brewery till the all clear.