The time of my life

The best time of my army life awaited me when I was selected for a vehicle mechanic’s course at Brighton in 1945. There couldn’t have been a greater contrast to barrack–room life. The trainees were billeted in a requisitioned hotel, the Albemarle, on the sea front overlooking the pre-war Aquarium. The town was a wonderful place for servicemen on leave and we were based in the middle of it. There were pre-West End movie shows, live theatre, ice skating, innumerable dance halls, and a range of Service clubs. These distractions tended to make our concentration at lectures suffer, but that’s the cry of all students. 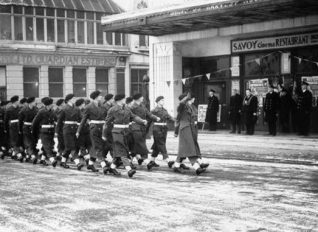 Click to open a large image in a new window. Soldiers marching past the Mayor and other dignitaries outside the Savoy Cinema on Brighton seafront. C.1945

Billeted at The Albermarle

The Albemarle hotel where we stayed had a covered porch supported by imposing columns and I was allocated the room above the portico with a balcony and a sea view. My approval was tempered when I noticed five other beds in the room and the appearance of some equally delighted REME trainees. We were to be together for four months and we seemed to gel straightaway. I know we paraded outside the hotel, but I don’t recall marching to work. I do remember being marched to the slipper baths near the Royal Pavilion for weekly hot baths.

Brigden’s Garage was the requisitioned workshop where we trained. The garage frontage was on Western Road, but we only knew the rear in Regent Row where we paraded and fell out into the Lathcleavers Arms. I suppose we did learn things there, but most of my memories are of the social life. The town was full of Canadians, convalescing aircrew, ex-POW’s recuperating, and happy 8th Army veterans and enough service women to go round. We hunted civvy girls, as it could mean Sunday dinner with the family. Going home at weekends was costly, as we didn’t get many leave passes during courses. Those desperate to see family would get a platform ticket, hide in the toilet, jump off at an unattended stop near London to avoid the MP’s. 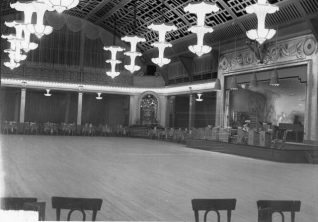 Click to open a large image in a new window. Regent Dance Hall

The high point of the Brighton period was VE-Day. I was ‘wounded’ at The Albemarle when a sash window dropped on my hand and it became swollen. I saw the MO at Preston Barracks and wore a sling. May 8th was VE-Day and a public holiday. The five of us walked into town in the morning. As we were walking along, a family approached us. The ramrod-straight father, who was in tweeds with a chest full of medals, saluted us, thanked us for winning the war, and gave us a pound each! Without a medal between us, we thanked him and assured him we’d soon finish it off. In a perfect world we would have handed the money over to the first convalescing soldier we saw. With my arm in a sling I looked the part, so we celebrated the end of the European war. All I remember was dancing VE night away round the Clock Tower, oblivious of my ‘war wound’. 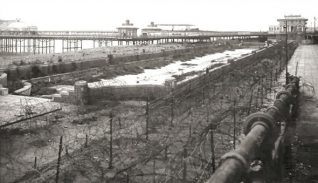 Click to open a large image in a new window. The beach was blocked in case of invasion in WWII

The beaches cleared at last

German POW’s using bulldozers cleared the mines from the beach prior to Whitsun and a portion of the beach was opened to the public soon after, and was immediately filled with the public as south coast beaches had been out of bounds for five years. At 84 years old, I realise that my recall may be slightly suspect, but I recall that The Royal Albion, The Grand and the Metropole were all service occupied. Sherry’s was a great club, though out of our price range. I do remember that the ice rink didn’t do a lot for the state of my army uniform, for I’d never been on ice skates.

By the Southdown bus depot in a dell was an ABC cinema, which like the Odeon, presented pre-West End releases. Tommy Farr the hero of British heavyweights ran a bar near the station. Going back, I realise Brighton is for the young, as I was 66 years ago, never noticing old people over forty. But thank you Brighton and The Royal Electrical and Mechanical Engineers for brightening my wartime experiences.