You are here: HomenextTopicsnextWorld War IInextWWII plane crash in Hove 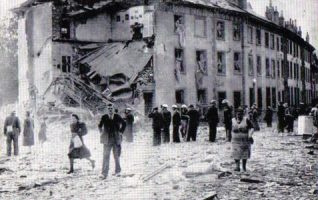 During WW2 I lived near the top of High Park Avenue. About 150 yards away at the east of Park Close, where houses were built after the war ended, a British war plane crash-landed. Although I tried to find some reference to this incident in these pages, up until now, the search has been unsuccessful. As far as I can remember, it was a Wellington bomber, but does anybody have more information?