You are here: HomenextTopicsnextWeathernextSnownext1979: Even the breadman got stuck! 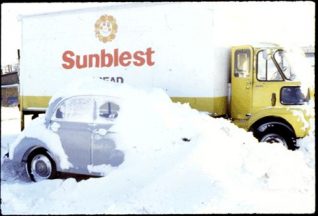 Heavy snowfalls in Brighton are rare enough to be memorable and photographed. This was the scene in the car park next to the Sunblest bakery on Falmer Road to the north of Woodingdean on New Year’s Day 1979. Just north of this point the road across the downs to Falmer was completely blocked.

I recall watching the unusual and evocative sight of snow falling on the beach and the sea. There were lines of mounded snow along the roadside on Marine Parade