You are here: HomenextTopicsnextWeathernextThe Great Storm 1987nextAlf and Marge's story 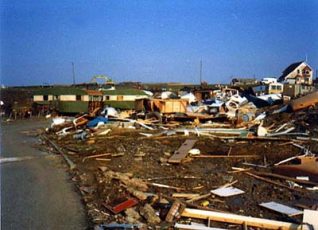 zoom
The caravan park after the storm
From a private collection

Alf and Marge are former residents of 94 and 96 Rushey Hill Caravan site, Peacehaven, on the night of October 15th-16th, 1987

A normal day
The morning and afternoon passed as usual and as the wind started to blow a bit stormy we carried out our normal routine; watched TV news and the weather forecast, assuming it was just another winter gale we ‘turned in’. Marge having got acclimatised to winter caravan life and its winter storms and I an ex navy man who served in cruiser battle ships and submarines and sailed in many foreign seas and been in many storms, and a hurricane on the way to the West Indies were not unduly concerned.

The storm begins
I lay awake reading and as the wind increased Marge woke up and we both got up and dressed, as by this time there was a lot of banging and sounds of things adrift outside. We got outside and saw a large panel on the front of Marge’s van tearing off. We always had plenty of rope in hand so we attempted to lash it back. The wind was gale force by now and in an exposed position in the road one could hardly stand up. Les, the warden went past and said “You better come up the house it’s getting worse”. We replied “ok we will in a minute”, we struggled on but we could see it was hopeless, we gave up and nipped indoors for some handy bits, 2 torches and money etc. and came outside clutching my big torch.

Metal bits of vans flying down the road
Standing in the lee of my van we weighed up the situation; wreckage, metal bits and what have you were flying up the road. Hanging on to each other we stepped into the road and got the full blast, a long aluminium sheet wrapped itself around us and after much twisting and struggling we broke free as it shot away and up in the air, flying like a magic carpet. Hanging on to each other we struggled up the hill. We had almost reached the Indian couples van, which was screeching and groaning as it strained at its moorings. Just before we reached it there was a terrific crack as it broke free, lifted up and blew across the road rolling over several times and crashing into another van leaving the broken power cable snaking round flashing and arcing every time it slapped the ground.

Rescuing neighbours
Hearing a man’s muffled voice shouting I shone the torch beam over to the wreckage to see him calling out. Keeping off the flying debris swept up the road we staggered over and found him in a dazed state scantily dressed, bare feet squelching about in the mud searching for his wife in the wreckage. The van was on its side, one end torn away. We joined in, Marge looking around outside and I joined him inside under the sagging van side. With the aid of the torch we tore over the wreckage inside but could not find her and had to leave it and go.

Made it to safety
A safe haven The three of us were struggling and scrambling towards the top of the hill and crawling to reach the warden’s house. With a sigh of relief we blew through the doorway thankful to have reached it into shelter, out of the violent roaring wind.

A van through the front window
Several people were already there; we wandered round hoping his wife was there too. To our delight and amazement there she lay on the floor fortunately only very dazed with a cut leg and clutched in the arms of her husband. Many people were now drifting in breathless, exhausted but relieved. We roamed around and took a look in the front room just in time to see the front window come in as a van crashed into it and the tow bar smashed inside. Looking out the door window we saw another van wrap itself round a telegraph pole and gas cylinders bowling around.

The danger of overhead power cables
The overhead power lines carried away and hung down snaking around, arcing and flashing as they grounded leaving the house in darkness just as the front door glass now blew in so we all moved into the safer back room. I put my big torch in the middle of the floor shining on the ceiling. So there we were squatting on the floor; round the room families, children, woman with a baby and several cats and dogs. We heard an ambulance had got through and taken the Indian lady to hospital. At times I stood with the torch at the bottom of the stairs as the toilet was on the next floor up shinning the light on the broken glass and stairs.

Like Dante’s Inferno
Next the water goes off and the toilet blocks up and part of the kitchen chimney stack comes down. By now the noise outside, the cables banging around and sparks flashing it’s beginning to sound like ‘Dante’s Inferno’.

The night dragged on
We now hear the news that the people at the bottom of the camp are cut off and sheltering in the bottom wash house. 3 police cars arrive and attempt to get down there. One car is wrecked and mission impossible. And so the night dragged on I do not think anyone was able to sleep and many stories told of their escapes from the wrecked vans and how they got to the shelter of the house. Wide awake as it became light Marge and I looked out the front window and could see our two old veteran vans still standing upright on their feet. As it became lighter 2 angels arrived, namely Pam and her husband arrived with steaming jugs of tea and sandwiches. Much enjoyed and appreciated.

People looked like refugees
A while later the police cars arrived and guided us with linked hands through the debris and flashing power lines to their cars and with wailing sirens drove us down into Newhaven to the church hall where we were sat at tables with hot drinks and food. As more came in the Indian man joined us at our table with his feet still encased in Marge’s furry hat. Someone found him a pair of shoes, another socks and trousers and out of the blue a jacket and cap. He looked just like a refugee. Lolling in our chairs we sipped our tea and thought of the ghastly and shocking sight of the wrecked camp and caravans we had seen from the police car as we sped down to the main road.