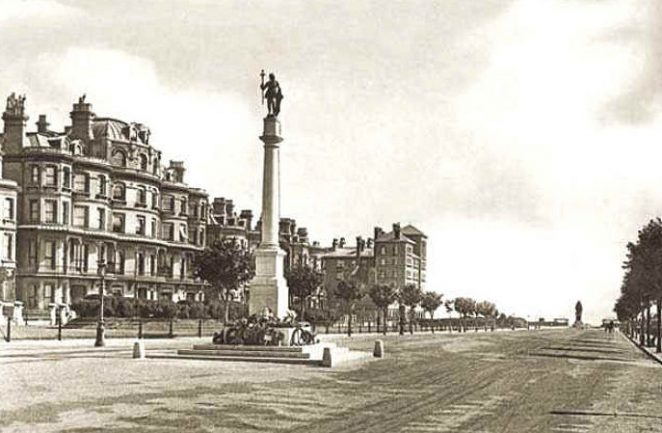 A monument in memory of Hove’s war dead was first proposed in January 1919, when a war memorial committee was set up. Their aim was to raise money for a war memorial and what funds remained were to be set aside for charitable purposes such as the support of the war widows and orphans. The idea of a monumental memorial was however not a universally popular idea, some advocated the building of a memorial hall or some other practical form of memorial. The project faced two major hurdles before completion, the selection of a design and finding a location where it would be installed. 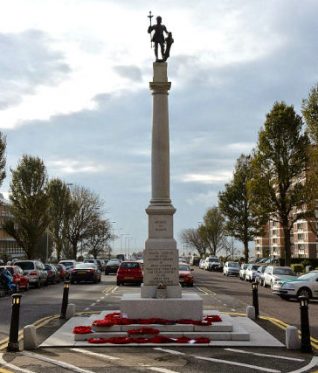 The first proposal was made in May 1919, for a monument in Palmeira Gardens, although popular with the council it was rejected by the Trustees of the Wick Estate who owned the land. By September 1919 two more possible sites were proposed; one was in the centre of the footway leading to the sea wall at the foot of St John’s Road, the other was in the centre of Church Road, at the top of Grand Avenue. A forth site was put forward in 1920, for a memorial located in Grand Avenue, sited in the centre of the broad road, about 100 yards down form the junction with Church Road.  In June 1920 Sir Edwin Lutyens, the architect chosen to design the monument selected the fourth site and the plan was approved.

Sir Edwin Lutyens had designed the Cenotaph in Whitehall, and he proposed a similar idea for Hove; this was rejected by the Council after a mock-up was assembled on Hove Lawns. The second idea was for an obelisk; this too was rejected. The next suggestion was for a thirty foot monument comprising of grey granite column with a bronze statue of St George at the top. The monument cost £1,537,  it was unveiled by Lord Leconfield on 27 February 1921.

No Roll of Honour

The slender design of the War Memorial severely constrained the number of words  etched onto it; ‘Their Name Liveth for Evermore‘ is on the south side and ‘In ever Glorious Memory of Hove citizens who gave their lives for their country in the Great War and World War‘ on the north side. The Roll of Honour listing  over six hundred names had already been memorialised on a brass plate ordered by the war memorial committee and mounted on the west wall of the vestibule of Hove Library. Both the Roll of Honour and the Memorial column remain today.