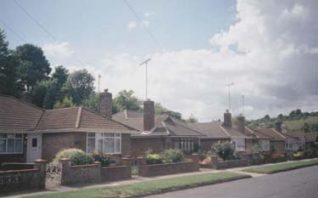 “About 40 years ago I had a council property so I joined the self build scheme. They were all prefabs on Heath Hill Avenue so we had to knock down all the prefabs and build the bungalows. There are 24 bungalows on one side self built and 24 bungalows self built on the other side.

It was a good day’s work; it was hard work. We all worked together. We started digging the footings and then the groundwork and worked down the whole side of the road. We wanted to move people in as soon as possible. When you have these schemes you borrow a lot of money so you want to get people in quickly, so we decided we needed outside help. We said ‘Tonight the roofs would be pitched’, then the woodwork, then we called in the tilers and then when you went to work the next day you would find three or four bungalows completed. When you’ve got the roofs on you see then you can work inside when it rains, that’s the whole thing, you were not wasting time, time is money.

We built those bungalows, 24 bungalows in 18 months. We did work hard.”