You are here: HomenextCity InsightsnextHenry Solomon: life and death in municipal service 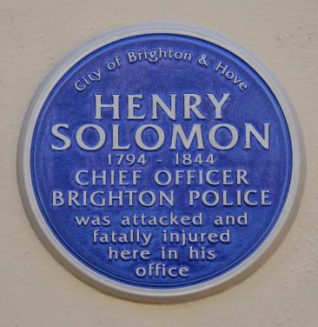 Blue plaque on wall of the Town Hall Brighton

A blue plaque, dedicated to Henry Solomon (1794-1844), first Chief Officer  of Brighton, (now known as Chief Constable) who was brutally murdered in the execution of his duty, was unveiled at Brighton Town Hall. Solomon was a watchmaker by trade who moved to Brighton in 1821 where he embarked on a life of municipal service, becoming a police officer. He rose through the ranks to become Chief Constable, the most senior policeman in the force, on 18 May 1838. You can read about Henry Solomon’s life and death here.

Unveiled by the Mayor

The plaque was unveiled at the dedication ceremony by the newly elected Mayor of Brighton and Hove Councillor Brian Fitch, who was accompanied by his wife the Mayoress, Mrs Norah Fitch. Other attendees included representatives from Sussex Police, the Brighton and Hove Jewish community and other interested parties. Brighton & Hove Hebrew Congregation Chairman, David Seidel said,

“It’s very pleasing that twelve local Jewish organisations, including all four synagogues have come together to work with the police and make this blue plaque a reality. Henry Solomon was an important figure in the histories of Brighton, the Jewish community and within the Police, and he is thoroughly deserving of the honour.” 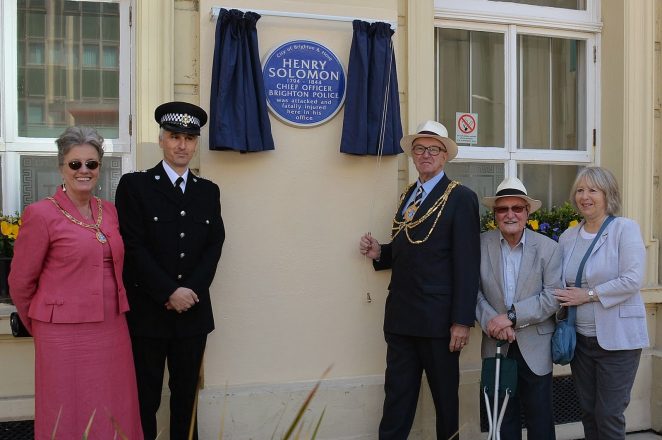