This week a blue plaque marking a house now known to be at one time the lodgings of the great Romantic painter John Constable (1776-1837), was unveiled by his great great grandson Richard Constable, who is himself an artist. John Constable visited Brighton many times in the period 1824-1828 and almost two hundred of his works can be directly related to this time.

This was one of Constable’s more productive periods during which he painted some of his most adventurous works. He was known to sometimes produce a number of paintings of Brighton beach in one day, recording the weather fluctuations and its chromatic effects. One of his most famous canvasses from this period is Chain Pier, Brighton 1826-27 which hangs in The Tate. 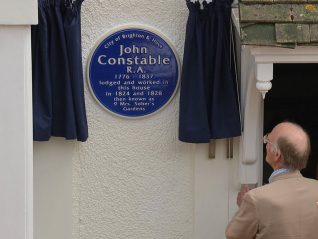 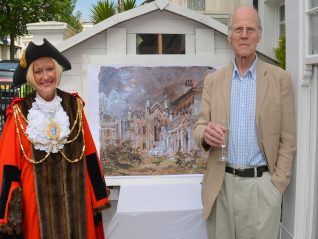 The Mayor of Brighton and Hove, Councillor Denise Cobb and Richard Constable with a print of ‘The Gothic House, Sillwood Place with Western Lodge’ by John Constable, 1824

Although art historians have always known about Constable’s stays in Brighton and of his lodgings and “painting room”, the exact location has, until now had not been known. But extensive new research has now made it possible to match the address of 9 Sober’s Gardens, cited by Constable in his Brighton correspondence, and the existing house at 11 Sillwood Road. Although the street name and number of this Regency house have changed, the interior is apparently little altered. The house is now owned by Peter Harrap and his partner Natasha Kissell; they are both artists who now enjoy Constable’s “painting room” as their own studio.