I was born in 1940 at the Elm Grove hospital, which at that time was called the ‘Brighton Municipal Hospital’. I lived, with my mother in Clermont Terrace in the Preston area of Brighton; my father was serving overseas in the Royal Air Force. My mother and I were later evacuated to a place called Annan, Dumfrieshire in Scotland, although at that time I was too young to remember any details about it.  When we came back to Brighton, still during the war, we moved to one room at a house in Hampden Road, Brighton.

Click on an image to open a large version in a new window. 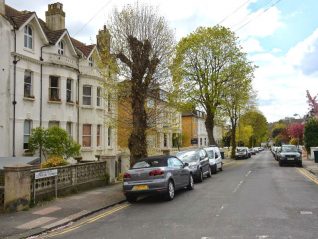 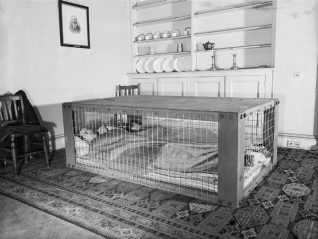 The Morrison Shelter was very cramped indeed and rather like being in a cage.

I can just about remember the air raid sirens and the sound of the doodlebugs. Bombs were still falling on Brighton and we spent many nights in the Morrison Shelter downstairs. This indoor shelter mainly consisted of a steel top, like a table top and wire mesh sides; one of which could be lifted open and acted as the door. Later on we moved to a very small flat in Upper Rock Gardens Kemp Town. In about 1947/48, not long after my father returned from the Forces and the war was over, we moved to one of the first newly built prefabs in Kipling Avenue, Woodingdean.

Did you ever live in Clermont Terrace? Maybe you live there now? Do you remember the doodlebugs? Maybe you had a Morrison Shelter? If you can share your memories with us, please leave a comment below.