You are here: HomenextPlacesnextFarmsnextPatcham Court FarmnextOne of the largest settlements in the Domesday Book

One of the largest settlements in the Domesday Book 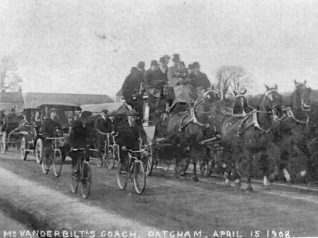 zoom
Coach on the old London Road Patcham, 1908
From the private collection of C.F.Davies

The former parish of Patcham was very extensive and covered an area of 4,425 acres including Moulsecoomb , Hollingbury , Tongdean and Withdean . In the Domesday Book of 1086 the manor (Patcham Court) was held by William de Warrenne, Lord of the Rape of Lewes; there was a church, and the population of between 1,000 and 1,750 made the village one of the largest settlements in the county. On 12 September 1302 King Edward I stayed the night in Patcham on his way from Beeding to Lewes. The old village has now been designated a conservation area and is fully described in the entry following this one. {1}
By 1801 the population was only 286. The first modern development in the parish was a line of villas which was built along the London Road at Withdean from the 1850s (see ” London Road, Patcham “), and by 1901 the population had risen to 1,110. The first extensive development took place in the south-westernmost corner of the parish at Moulsecoomb (q.v.); the South Moulsecoomb housing estate was developed by Brighton Corporation in the early 1920s, and the 94 acres of land which were used on the eastern side of Lewes Road were annexed by the county borough of Brighton and Preston parish on 1 October 1923. In 1926-7 Steyning East Rural District Council erected twenty houses at Patchdean, but on 1 April 1928 most of the parish was absorbed by Brighton; the other 152 acres to the west of Dyke Road at Tongdean Farm and Lower Tongdean Farm were added to Hove . (Tongdean Farm stood by the junction of Dyke Road Avenue and Hill Brow, but some farm cottages remain at The Spinney. Lower Tongdean Farm stood at the junction of Tongdean Road and Meadow Close. The Tongdean area remains within the ecclesiastical parish of Patcham , however.) With the integration of Patcham into Brighton development of the parish, which had been piecemeal until then, proceeded rapidly and large estates were built in the Braybon Avenue, Carden Avenue, Ladies Mile and Valley Drive areas. The Hollingbury and Westdene estates were added post-war. The Patcham , Brangwyn, Ladies Mile and Hollingbury areas have a combined population of over 13,500.
{1,83,127,277,279}
Patcham was supplied with a library service by the county council prior to 1928, and this arrangement was continued for some years by agreement until the present branch library in Ladies Mile Road was opened in 1933. In 1939 a temporary church was erected at the bottom of Braybon Avenue, but the permanent Church of Christ the King, South Patcham, was built in 1958 with the old church becoming a hall. The 1963 Roman Catholic Church of St Thomas More stands adjacently. {123,124}