You are here: HomenextPlacesnextHotelsnextMetropole Hotel, Kings RoadnextA most prominent building

A most prominent building 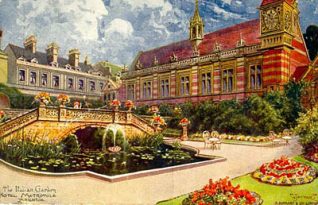 Opening of the Hotel Metropole
The Hotel Metropole was built in 1890. Faced with red terracotta, the hotel was markedly different to the surrounding seafront whitewashed properties. The building was designed by Alfred Waterhouse, the architect of University College in London and the Natural History Museum. The cost of construction was £57,000. In all, a customs house, 12 lodging houses, a parade ground and a park were cleared to make way for the hotel.

A special train from London
When the hotel opened, a lot of the patrons were welcomed and serviced by staff from the recently opened Grand Hotel next door. The London Times reported on the opening of ‘the most prominent building on the Kings Road’, noting that 1500 people arrived on a special train from London: ‘The Metropole’s own band played in the ball room (Clarence) and the Coldstream guards played in the central dining room. The Italian garden was lit by numerous electric lights producing a sparkling and dainty effect’.

Modern interior decoration
All the furniture was designed by Maple’s. There were three dining-rooms capable of seating 500 people; these were decorated in colours ranging from golden brown to ivory white, with matching curtains in silk. The vaulted ceilings were cream and gold. The smoking room had easy chairs, covered in fine Persian saddle bags and throw rugs. Below this were the Turkish baths. The rooms were filled with scent created by the hotel’s own perfumier, and were decorated by Albert Kingsley and the brothers Temple.

Lavishly decorated suites
There were many English touches in the hotel, such as large fireplaces, including a carved oak one which was designed by Queen Victoria’s nephew. The bedrooms consisted of lavishly decorated suites, modest ‘bedding rooms’ and en suite bathrooms, where patrons could choose hot or cold fresh or sea water. The water came from the newly designed ‘tapped water wells’ (or taps). Prices ranged from 3/6d for single room to £3-8s for a suite ‘with servant meals at 6/ per day’. The hotel boasted its own printing room that made all the stationery and menu cards right up until 1982.

Banquetting facilities
Among the many facilities were the newly created Clarence Rooms, which had their own entrance in Canon Place. Designed as a wagoned ceiling ballroom, with an octagonal reception room and a ‘crush’ room for light refreshments, the first use of this room was an ‘at home party’ with Miss Campbell. A Cinderella dance was hosted by the Middlesex Yeomanry Cavalry shortly afterwards in the room, which was built on an old marching hall.

Life at the hotel
Many characters have passed through the doors of the Metropole, including the ‘Gaiety girls’, Princess Louise (daughter of Queen Victoria), and Lillie Langtry. The hotel was also used for a few seedier trysts. A new law was passed that allowed a couple to divorce if the husband was ‘caught’ with a female (not his wife) in a bedroom. All that was needed to secure a divorce was a witness (such as the maid) or a hotel bill showing joint occupancy.

Wartime at the Metropole
Several hundred military men were stationed at the Brighton Metropole during both World Wars. Due to the large military camp at Shoreham (the first licenced aerodrome), the Metropole became an aircrew holding unit in 1941 for the RAF and other allied nationalities. (In fact, three major airlines still station their air crews overnight at the Metropole today). The building saw some action in the Second World War when a roof-mounted machine gunner spotted a low flying FW190. The surprised plane retaliated. Another German plane later tried to bomb the hotel, but missed and dropped its pay load in a nearby park.

Modern times
The hotel was part of the Gordon hotel chain from its construction up until 1959, when it was was acquired by AVP industries. The hotel then underwent a major revamp, which included the addition of bathrooms to all its rooms. People who remembered the original artwork were horrified to find that some of it had vanished or had been covered up. The change to the roofline meant that the central spire and small turrets were removed and two new floors added. The winter gardens vanished into the new Regency ballroom, and a large conference suite topped by a tower block was included in the scheme. This meant the demolition of another row of houses and the graceful St Margaret’s church. Strangely, some of the old building walls were used in the construction and support of the new buildings.

The first licensed casino in Britain
The new Starlit restaurant (Chartwell room) on the seventh floor commanded a view across the whole of the sea front. The Clarence room was the venue of the opening of the first licenced casino in Britain. The casino’s walk-in safe can still be seen (it is now impossible to remove without demolishing part of the building). The casino moved to the International Casino in Preston Street in 1985, and the original Metropole logo can be seen on the windows.

Extra amenities
Modern times made their way into the life of the Metropole with the construction of a swimming pool and health club in the space occupied by the former Turkish baths. The Metropole group was acquired by Lonrho group for 25m in 1977. This led to further expansion, including the opening of the Cannon (steamers) bar and the Metro (steamers) night club. In recent years, the hotel has changed hands to the Stakis group and is now part of the Hilton group.