A small one bar pub 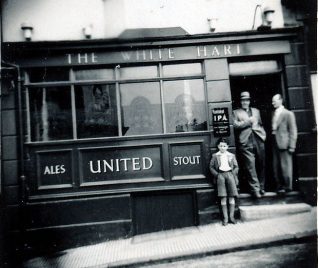 The White Hart public house was situated approximately half way up on the left side York Hill, looking up from London Road.  Opposite the White Hart  was Tamplins’ Brown Jug, which was an even smaller hostelry. Bill Croydon’s newsagent shop was also on the opposite side of the road to the White Hart. On the corner of York Hill with Elder Street was Hillman’s grocers shop.

What about the ladies?

The White Hart was a one bar public house only licensed for beer sales. This was fine as far as the male customers were concerned, but it created difficulty in attracting the women folk. This was until ‘Babycham’ made its appearance as an attractive drink in a posh glass for the ladies. Babycham was, in effect, a pear cider attractively presented.

In those days all the ‘tied’ pubs had a distinctive brewery livery. United pubs were dark green, Tamplins  brown & cream, and Kemp Town brewery pubs were dark blue. Customers tended to get used to the taste of a particular brewery brand and mostly only visited pubs within that group.

Drunk as a rat?

My dad took over the White Hart circa 1951 but as he still had a business to run in Surrey he was absent during weekdays. So it was left to my mum to run the bar, and I was delegated as the cellarman.  I was fortunate in being shown how to tap barrels by Frank Boswell, cellarman for the Hare & Hounds, also the Fitters Arms. The first barrel I tapped without Frank being there, blew the tap out of my hands and half the beer went down the drain. I imagine there were quite a few drunken sewer rats around?

I was a strong lad

I was only aged 14 at the time but Frank, a really nice chap, was a great help to me.  The other duties were bringing up crates of bottled beer from the cellar, also coal for the fire in the bar. I must admit all the heavy work made me into a strong lad which made sure I was not bullied during my Fawcett School days. The photo taken (by me using a Kodak box brownie camera) of the outside of the pub, shows the outgoing landlord on the right of the doorway, with my dad and younger brother. 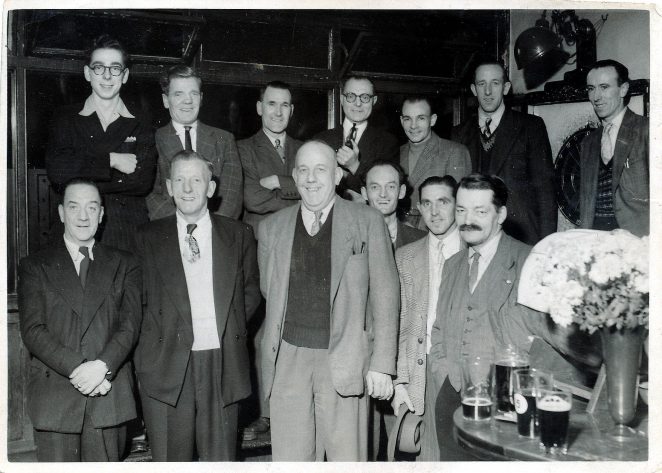 1.  Roy Stevens lived in Elder Street he worked as a boiler maker for the Brighton Railway Engineering Works. He played piano during weekends at the White Hart.
2.  Nelson Ancell married to Dolly
3.  Bill Croydon – owned the newsagents shop opposite side of the road to the WH
4.  Mr Watts – manager of Mac Fisheries shop in London Road
5.  Stan ??? lived in Elder Street. He operated a mobile cinema around the outlying villages. He also had a fine tenor singing voice and played drums
6.  Mr Jennings – worked with Mr Watts
7.  Bill Boxall – lived in Elder Street. Worked as a vehicle paint sprayer

1.  Can’t remember his name
2.  Charlie Ancell, brother to Nelson. Lived in Elder Street married to Ivy.  Market trader in fruit and veg.
3.  Percy Searle (my Dad) Landlord of the WH
4.  Sid Farrow, Painter and decorator. A Brighton & Hove Albion supporter.
5.  Jack Tarr, a Devon man married to Joan Tarr
6.  I believe his name was George Williams but not sure. He was a french polisher who lived in London Street