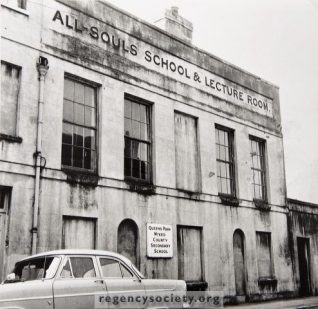 The All Souls annexe itself was situated mid-way along Essex Street which was otherwise lined with small terraced houses. I seem recall from the time, that most of these looked to be empty, and that would seem to make sense as I believe the entire area was levelled for redevelopment in either late 1965 or early 1966. As far as I am aware, the school ceased to have any presence at all at the All Souls building sometime during the latter part of 1965. One would assume that it was for that reason, that the new mobile classrooms were then erected in the girl’s playground at the main site, round about that same time.’

I am not sure when exactly the annexe first came into Queen’s Park School usage, but it was initially the location of all three first year form rooms with the intake of September 1964 (forms 1A, 1B and 1C;  there was no 1D back then). There were three small classrooms on the ground floor of this very old building. They had dirty bare wood floors, open coal fireplaces for heating in winter, plus ancient ‘school type’ desks set in pairs which probably dated from the Victorian era.

There was a small hard surfaced playground immediately to the other side of the wall with the door way in it, visible at the far right of the picture, with the main wall of the building then running along to the left. I seem to recall that there was an old wooden framed glass veranda running most of the length of that wall with flaking, green painted wooden uprights, and also an absolutely filthy brick built outside boys’ toilet located somewhere across to the opposite side.

In September 1964 form 1A’s form teacher was initially a Mr Mc.Neff. He was new to the school at that time, and happily he did not stay for very long. 1B’s form teacher was a Mrs Pates, who taught book craft and light craft, that kind of thing. IC’s teacher was the very old Miss Colonette, who also used to play, or rather hammer the piano during hymn singing at Firle House’s assemblies; these were held every Friday morning in Room Six of the main school building.

When it was needed the wretched piano, plus its stool, had to be manhandled by pupil ‘volunteers’, right across the floor of the upper hall every single time, so that Miss Colonette could inaccurately bash its keys just outside of Room Six’s wide open door. In I think January of 1965, 1A’s form room, still with Mc.Neff presiding for a time at least, was transferred to Room Eight in the main building. The other two first year classes remained based down at All Souls for the whole of that school year I believe.