'Are you being served?' 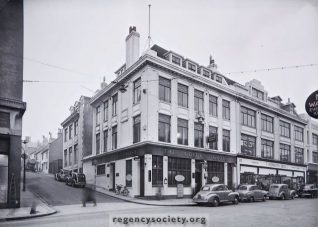 zoom
The north side of Western Road, at the corner of Marlborough Street - 29 January 1955. During this year the Golden Cross Inn, which like Johnson's had been completely rebuilt in 1928/30, was sold to Johnson Bros. who reconstructed the premises as an extension of their shop. Click on the photo to open a large version in a new window.
Image reproduced with kind permission of The Regency Society and The James Gray Collection

From 1963 until 1969, I worked in Johnson’s Department store in Western Road. I started work there straight from school and I enjoyed it very much. I worked in the ‘China and Glass’ section in the basement, and then graduated to window dressing. I do remember that all us ‘young things’ who worked there had a great social life together.

People I remember were General Manager Mr Johnson, Ian in ‘Haberdashery’, Roger and Tony in ‘Carpets’, my old mate Janet Jeffs in ‘China and Glass’, Janet and Julie, Miss Faulkner, Mrs Jestico, Miss Cole, Mr Fogarty in ‘Hardware’, my boss Mr Yonwin head of ‘China and Glass’, Billy and Paul, and David Field. It was a really old fashioned store a bit like the shop ‘Grace Brothers’ in the TV show ‘Are you being served’. Every Thursday all of the juniors went and got the stationery from upstairs in the stock room; this was our highlight of the week.

Stocktaking was a chore and involved counting everything, right down to the last egg cup. Janet Jeffs and I were caught singing ‘Rag Doll’ at the top of our voices in the stockroom by General Manager, Mr Johnson. But he only spotted me and so I was fined ten old shillings. I remember running upstairs with a 21pc tea-set or dinner set because it was quicker than the lifts. The lifts took a long time to come because they were attended in those days.

It seemed that our customers in those days were quite upper-class and often had charging accounts; and of course the goods were of a high quality. The store closed half day Saturday and we all used to pile into the pub at lunchtime. It was an excellent place to work, and I have many happy memories of the time. When the store burnt down on 5th Nov 1970, I stood outside watching, and cried my eyes out. A lot of the staff relocated to a store in East Street where The Reject Shop used to be.

If you have any memories of Johnson’s Department Store, please share them by leaving a comment below.